Attitudes towards the Iraq and Afghanistan conflicts: Data from the British Election Study

I recently wrote about the British Election Study 2009/10 as a resource, providing some tables on how vote choice and attitudes to party leaders differed across religious communities.

As well as asking the British electorate in detail about their voting behaviour, perceptions of parties and their leaders, and the dynamics of general election campaigns, a series of questions taps into views on both long-standing policy debates and more recent political issues. 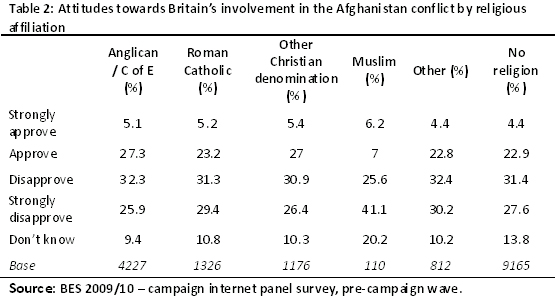 What is evident from Tables 1 and 2 is that, while opinion tends to be against British involvement in both conflicts across the different categories, levels of disapproval are highest amongst Muslims (though slightly more so in the case of Iraq). Also, across all categories, higher proportions respond ‘don’t know’ in relation to the situation in Afghanistan, despite Britain’s military involvement there since 2001 (with a fifth of Muslims unsure).

Ben Clements is Lecturer in Politics at the University of Leicester, with interests in the study of elections, public attitudes to the EU, and the work experiences of the visually-impaired. He is currently working on a book on religious affiliation and political attitudes in Britain, to be published by Palgrave Macmillan. He can be contacted at bc101@leicester.ac.uk

One Response to Attitudes towards the Iraq and Afghanistan conflicts: Data from the British Election Study