How Typical was Thatcher?

In the wake of her passing, there has been a good deal of interest in the late Baroness’ religious background and convictions, and the extent to which these drove her political ideology.

The young historian and business adviser Antonio Weiss has written a fascinating University of Cambridge undergraduate thesis on this subject, available here. It has received widespread coverage including at the Huffington Post and on the Radio 4 Sunday programme.

Weiss gives much attention to Thatcher’s upbringing as a Wesleyan Methodist as well as her conversion to the Anglican Church shortly after her marriage to Denis Thatcher in 1951. (Notably, however, she married in Wesley’s Chapel in City Road, London, possibly because Denis Thatcher was divorced and an Anglican church wedding was not possible.) He cites Hugo Young’s diagnosis that the conversion was for social and political reasons rather than a repudiation of her Wesleyan upbringing (Weiss, p. 28); he also cites Thatcher’s own account in The Path to Power (1995) that ‘John Wesley regarded himself as a member of the Church of England to his dying day. I did not feel that any great theological divide had been crossed’ (Weiss, p. 7).

This seems plausible, so I thought worth examining the available survey data regarding the tendency of those raised as Nonconformists to switch to another religion in adulthood. The British Social Attitudes surveys, which have run in most years from 1983, capture respondents’ current religious affiliation and also the religion in which they were raised. A two-way table of current religion by religion of upbringing for the birth cohort born between 1920 and 1929 (since the late Baroness was born in 1925) shows the following: 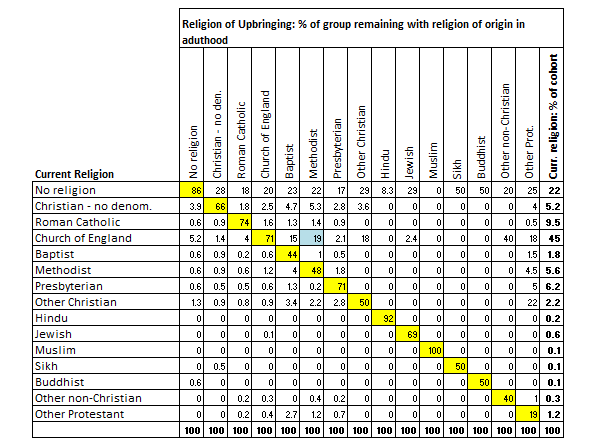 We can see that 48 per cent of those raised as Methodist remained with Methodism, but a full 19 per cent converted to Anglicanism. To simplify the table, we can combine some of the categories but keeping the Methodists separate because we are interested in whether they are different. Note that we still count respondents as switchers if they switch faith communities within the broad ‘Other Christian’ or ‘Non Christian’ groups. 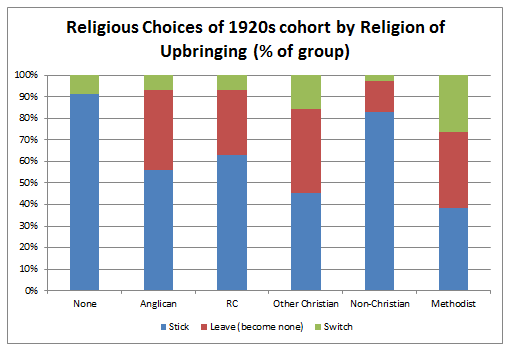 The decision to switch may be primarily driven by the following: to join the faith of a spouse, changing religious convictions, or perhaps the social aspects of different faith communities. There is a lot of work in the US to suggest a status hierarchy in religious communities so that as people become upwardly-mobile they may also switch to ‘higher-status’ religions. Alternatively, people may switch when their basic beliefs about the world change – for example, there is some evidence that as people become more politically liberal in the US, they join more liberal faiths.

The combined BSA datafile doesn’t allow us to test the causal effect of political ideology on switching, but it does allow us to look at the effects of religious background on the tendency to switch or stick with the religion of upbringing, controlling for confounding variables. We can conceive of people as typically being stickers, religious leavers (from having an affiliation to none) or religious switchers. Ideally we would run a multinomial logistic regression to see how religious background predicts membership of these groups, but it’s complicated by the fact that we would also like to take account of those raised as having no religion. (Alternatively, we could run a loglinear model to analyse ‘religious mobility’, but this is more complex and remains for future work).

Those raised and remaining ‘none’ are technically stickers, but are likely to be most similar to the religious leavers. However, if we separate them from the stickers and group them with leavers, being raised as ‘none’ will then perfectly predict membership of that type.

So as a workaround we divide people up into switchers (including from none to a religion) versus everyone else (stickers and leavers); or stickers (including from none to none) versus everyone else (leavers and switchers). We then predict membership of the ‘switcher’ group and ‘sticker’ group in turn, controlling for age, gender, whether the respondent has a degree-level education, and marital status, and examine the effects of religious background to see if Methodists are more likely to switch or stick. We use the biprobit command in Stata 12.1 to take account of the fact that unobserved characteristics of the respondents will jointly affect whether they are a switcher or a sticker – to put it another way, these religious outcomes are not independent, but relate to each other. This model choice isn’t ideal, but arguably allows us to take account of more information in the data than if we looked at switching and sticking in completely separate models. 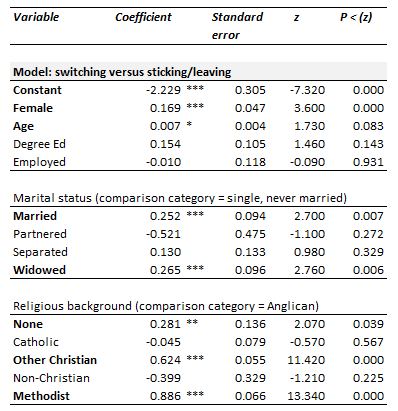 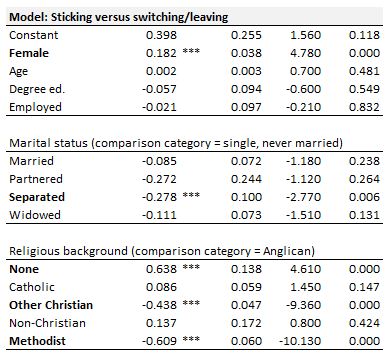 Next, we use the model results to predict the overall likelihood of being in either of these groups, and neither, depending on respondent characteristics. Those who are neither switchers nor stickers are logically those who left their religion (a base category where we do not have any respondents raised as ‘none’). As mentioned, the bivariate probit model choice isn’t perfect (the predicted outcomes for the denominations do sum to 100, but are slightly shy for those raised as Nones; the model also predicts that 1% of this group become ‘leavers’ which is not technically possible).

But setting this aside, the results look reasonable. After controlling for the confounders listed in the tables above and averaging effects over the 6504 respondents, we can see that a relatively high proportion of Methodists are predicted to switch, and this appears higher than members of some other faith groups. We should note that we have kept the Methodists separate because we are interested in them; if we looked in particular at the Baptists (rather than in this model grouping them with the ‘Other Christians’) we might find a similar tendency to switch. However, there are limits to the number of groups we can include in the model, and contrasts we can run; it does seem plausible however that those raised as Methodists are like those raised in the other Free Churches in their tendency to switch. 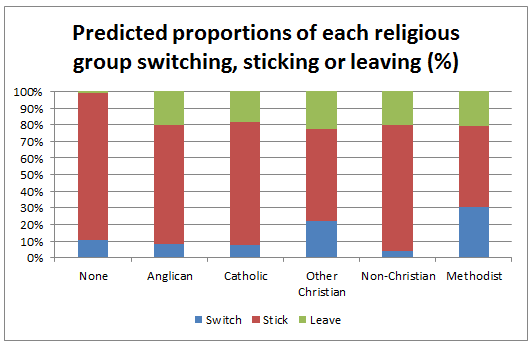 Finally, we can predict the likelihood of somebody like Thatcher being a religious switcher given the fact that they were female, degree-level educated, employed (at least until the early 2000s), married, and raised as a Methodist. We also assume for this purpose that her age is 66 (her ‘average age’ over the 1983-2010 period). While this is a fairly crude simulation, these seem appropriate representative values. 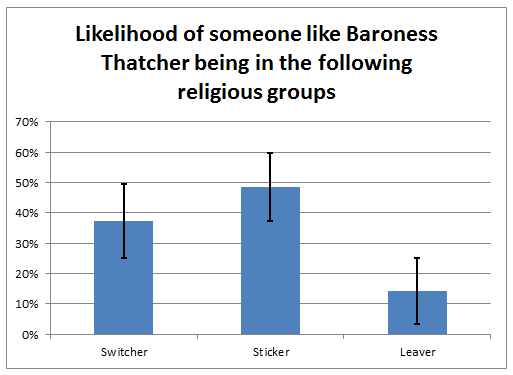 So was Thatcher typical? Switching appears to have been relatively common among older birth cohorts and it seems she was not an outlier; it would have been more unusual for her to have become a religious leaver. It also seems unlikely that the choice was purely driven by expediency. There have been Conservative Prime Ministers who were not Anglican, and indeed the set of twentieth-century Anglican or Episcopalian prime ministers is a little smaller than expected: Salisbury, Balfour, Baldwin, Churchill, Eden, Macmillan, Douglas-Home, Heath, Thatcher, Major, and Blair. Nevertheless, historians have much to discuss regarding differences in religiosity and political psychology among British political leaders, where we might well expect starker contrasts.