The 2011 census reveals a remarkable amount of neighbourhood variation in levels of religion or non-religion.  Looking across the 8,570 wards in England – small areas with an average population of about 6,500 – the proportion of people describing themselves as having no religion ranges from virtually nil to more than half.  Even if we ignore the most and least religious deciles and focus on the 80% of areas in the middle, the percentage of no religion is nearly twice as high in some wards as in others (34% versus 18%). 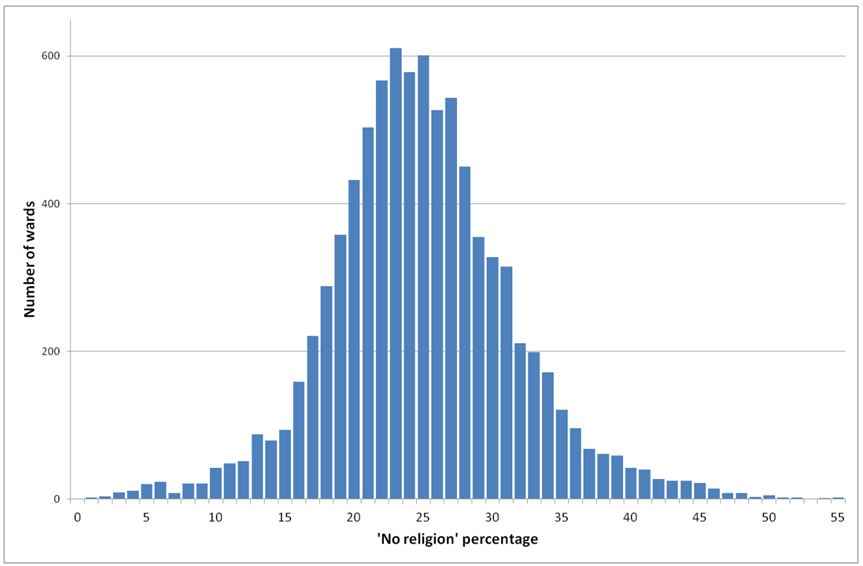 Unsurprisingly levels of non-religion are lowest where the share of Muslims, Hindus and Sikhs is highest.  Bastwell (Blackburn) is the most faithful ward in the country, with religious ‘nones’ making up only 1.5% of a population that is 85% Muslim.  It is followed by Southall Broadway and Southall Green, Asian-majority but religiously very mixed areas where Sikhs are the largest group.

If Hindus, Muslims, Sikhs, Jews, Buddhists and people of other minority religions are excluded, the lowest levels of ‘no religion’ (around 9.5% of the total classified as Christian, no religion or religion not stated) are recorded in Swanside, Eccleston and West Derby, all in Merseyside.  The legacy of Irish Catholic immigration from the mid-19th century is still felt throughout the region around Liverpool (and eastwards as far as the road to Wigan Pier).

At the opposite end of the scale, Brighton provides the wards with the most non-religion: St. Peter’s and North Laine, Hanover and Elm Grove, Preston Park, Regency, and (following Maerdy in the Rhondda Valley) Brunswick and Adelaide.  Just as strikingly, however, Wales contributes 45 of the 75 least religious wards.  In second position amongst them is Gilfach Goch, the setting (in fictionalised form) for How Green was my Valley.  How Christian was my valley then … and the valley of them that have gone. But it is not only the pit villages that have defected from church and chapel; wards in Aberystwyth, Menai and elsewhere in Wales are on the list.

With area-specific differences, the challenge is to discover whether the contrasts are explained by composition or context.  Is Brighton different from Liverpool, that is to say, because the people living in those places have different characteristics, or because the culture or social ecology leads them to describe themselves differently? Clearly composition has a role: we know that levels of religious affiliation vary considerably by ethnic and religious background, as discussed above.  Likewise gender and generation are important factors.  Such traits account for only a small part of the overall variance in non-religion, however.  (Minority status is important but a relatively small proportion of the population belongs to these groups; age and sex are influential across the board, but they are distributed in very similar ways in most wards.)

So, the question remains: are religious and non-religious people geographically concentrated for reasons not directly related to religion (but rather because of personal characteristics that may not be obvious)?  Or are local norms and religious environments sufficiently distinctive that individuals will think and behave differently depending on where they live?  Of course the nature of ecology is that composition and context shape each other: Brighton has a large gay population, and as a result its culture is different than it would have been otherwise. That culture is influenced by selective migration, and it in turn affects others through ideological diffusion.  Understanding the reasons for geographical variation would help us to understand religious change.

This entry was posted in Religion and Ethnicity, Religious Census, Research note, visualisation. Bookmark the permalink.