Religion and Politics among Ethnic Minorities in Britain

The Ethnic Minority British Election Study (EMBES) conducted at the last general election thanks to the generous support of the ESRC contains a plethora of questions on religious belonging and practices of the five largest ethnic minority groups in Britain. The EMBES team are currently working on a paper concerning how the religious involvement of minorities impact on political behaviour and attitudes. We welcome this chance to share with the BRIN audience some of our preliminary findings.

The survey
First, we asked respondents whether they thought of themselves as belonging to any religion. A large majority of all ethnic groups belonged to a religion, with the Caribbeans the lowest at 67%. Most also reported that religion is ‘very’ or ‘extremely’ important to them. A large majority were also observant on a regular basis and attending their place of worship beyond the main religious festivals, with ‘observant’ defined as adherence to religious practices such as praying and observing dietary prescriptions and fasts. The gap between levels of religious observance and attendance attendance for Pakistani and Bangladeshi minorities,which is not observed for other ethnic groups, may be down to women attending mosques less than men but merits further investigation.

We then looked at the religious diversity of ethnic groups. Almost all the Pakistani and Bangladeshi respondents reported that they were Muslim, and almost all the Black Caribbean respondents reported that they were Christian. A significant minority of Indians and Africans are Muslim; in the Indian case, 8% report that they are Shi’a (somewhat higher than the rate for Pakistanis and Bangladeshis) while a significant minority of African minorities either reject a ‘denomination’ label or do not know. Among ethnic minority Christians, Roman Catholicism predominates among Indian Christians, while Pentecostalists form the largest group for Black Caribbean and Black African respondents alike. 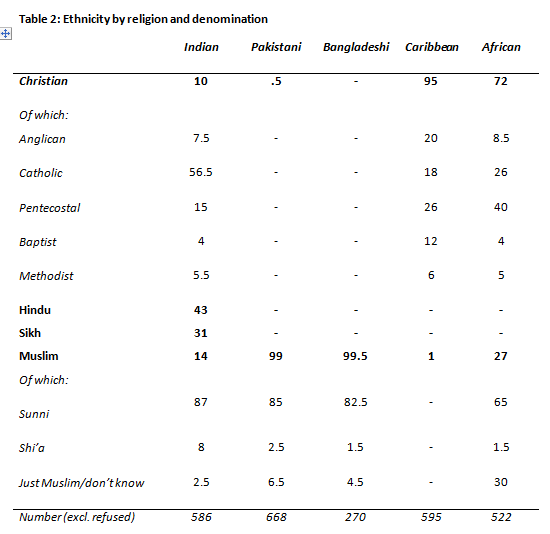 Next, we asked respondents whether most attenders at their place of worship shared their own ethnicity. For Hindus, Sikhs and South Asian Muslims, a majority reported that their place of worship was mostly frequented by people sharing their ethnicity. By comparison, about a quarter of Black African Muslims reported so. Christians across the ethnic categories appeared to attend more diverse places of worship, although a large proportion (between 35% and 50%) of Pentecostalists and non-conformist Christians (whether Indian, African or Caribbean) reported that most of their congregation shared their ethnicity. 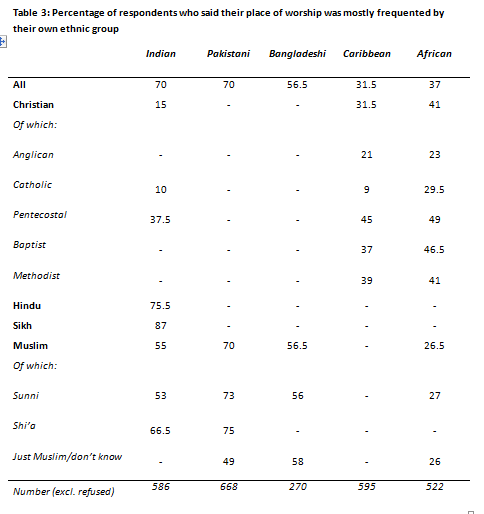 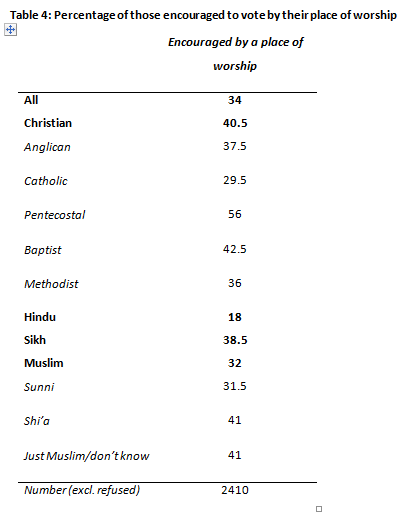 We also asked respondents about their non-electoral political participation: whether they engaged in political activity besides voting in elections. About a third reported so, fairly consistently across the ethnic categories. When looking at specific types of political engagement, there appeared to be some variation by ethnicity: 22% of Black Africans reported involvement in a civic or political organisation or association compared with 14% of Indian respondents, while about 20-23% of South Asians and Black Caribbeans reported that they signed petitions and engaged in boycotts of products or companies compared with 16% of Black Africans. We will tackle the source of these differences in our future work.

Finally, we asked respondents whether places of worship should engage with political issues. Here, again, we see a relationship between our respondents’ religion and their view of the role that religion should play in politics. As few as 20% of Anglicans and 22% of Pentecostalists reported that places of worship should ‘keep out’, making Christianity the most ‘politicised’ religion,while 61% of Hindus did so- making them the least ‘politicised’ religion. Of those who thought that there should be some engagement, a majority thought that the religious authorities should engage in politics, but only on moral issues; breaking it down by denomination, this was true for all groups except the Pentecostalists, where 44% thought that places of worship should engage with all political issues. Muslims were the second religious group most in favour of religious authorities having a say in all political issues after Christians. Within Christian denominations, after Pentecostalists the Roman Catholics were most in favour of full engagement. 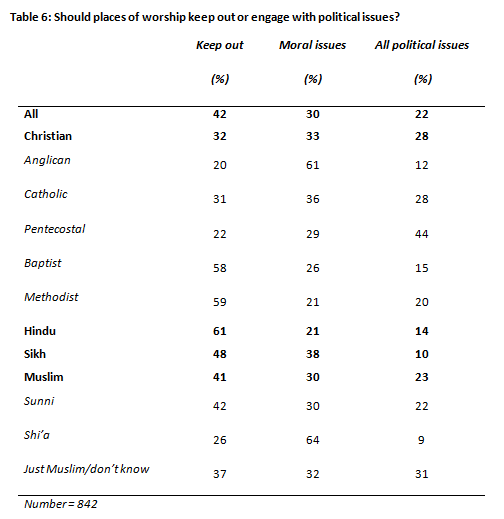 This very simple analysis already shows a great diversity in ethnic minorities’ religious involvement, the role their religious places of worship play in mobilising their political participation and their different perceptions of the role religion should play in politics. The differences between levels of participation among religious groups could be a factor of other underlying differences- such as ethnic composition of these groups, their socio-economic and demographic profile (class, education, age, etc). We will be sure to keep the BRIN audience posted about our work in this area and the completed paper will be posted here soon.

The EMBES survey was designed to capture representative samples of the Indian, Bangladeshi, Pakistani, Black Caribbean and Black African populations in Britain. The sample sizes are larger than generally available and the survey is detailed: the full questionnaire is available here for those interested in seeing all that is available. Please do not hesitate to contact EMBES team members (Anthony Heath, Steve Fisher, Gemma Rosenblatt, David Sanders or myself) if you require further information. For more information on religion and the role of religion in minorities’ political involvement please contact maria.sobolewska@manchester.ac.uk.

Other posts on BRIN reporting findings from EMBES can be found here.

One Response to Religion and Politics among Ethnic Minorities in Britain