The British Social Attitudes (BSA) 2015 survey dataset was released recently and this post provides a brief analysis of long-running data on religion available from the BSA surveys. It focuses on religious affiliation, religion of upbringing and religious attendance.

Firstly, Figure 1 reports the time-series data on affiliation for the period 1983-2015. Noteworthy features include the long-term decline in the proportion identifying as Church of England (40% in 1983, 19% in 2015), increased identification with non-Christian faiths over recent decades (3% in 1983, 8% in 2015), broad stability in levels of Catholic identification (10% in 1983, 9% in 2015), and the steady upwards climb of the proportion with no affiliation (32% in 1983, 49% in 2015). The proportion of other Christians has increased over time, from 15% in 1983 to 17% in 2015. However, the composition of this group has shifted. The proportion identifying as non-denominational Christians has risen over time, with a decreasing share professing a denominational affiliation – in particular, with the Nonconformist churches. 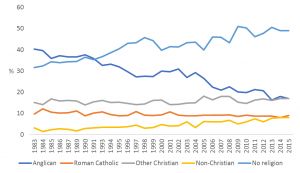 Secondly, Figure 2 shows the levels of religious attendance over time. For clarity of presentation, attendance has been divided up into three categories: attends once a month or more often (or frequent attendance); attends less often (infrequent attendance); does not attend. In contrast to the shifting patterns of affiliation across recent decades, attendance shows a picture of somewhat less marked change. The proportion reporting that they never attend religious services (beyond going for the traditional rites of passage) has risen from 56% in 1983 to 65% in 2015. There has been some decline levels of frequent and infrequent attending: attending once a month or more fell from 21% in 1983 to 18% in 2015 (with weekly-attending falling from 13% to 10%); the respective figures for those attending less often are 23% and 17%. 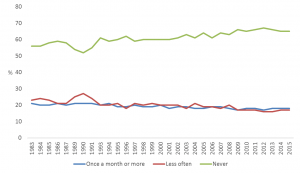 Third, Table 1 provides a summary of the three long-running indicators of religion carried in the annual BSA surveys – affiliation, religion of upbringing and attendance. The data on religion of upbringing show that the proportion saying they were raised within the Church of England has fallen from over half (55%) in 1991 (when the question was first asked) to around three-in-ten in 2015. The proportion saying they were raised within a Catholic household is the same in each survey. The proportion raised in some other Christian context has increased (from 22% to 28%). The internal composition of this category has shifted markedly over time. In 1983, the 22% was comprised of 19% who had a particular denominational affiliation and 3% who did not. In 2015, the 28% was made up of 10% with a denomination and 18% with no denominational affiliation. The proportion whose religion of upbringing was a non-Christian faith was 3% in 1983 and 9% in 2015. There has been a marked increase in the proportion saying they were not raised within any religion: from 6% in 1983 to 20% in 2015.

Percentages have been rounded and may not sum to 100.

Fourthly, and looking at the religious data in the BSA 2015 survey more detail, Table 2 shows the levels of non-affiliation, not having been raised within a religion and non-attendance at religious services for sex and age group.

Having no affiliation is somewhat more common amongst men than women, as is not attending religious services. Across the age groups, there is considerable variation in two of the three indicators of secularity. Younger age groups are much more likely to report that they did not have a religious upbringing and do not have currently have a religious affiliation.  There is much less variation across age groups in terms of the proportion not attending church or some other place of worship. Whereas amongst 18-24 year olds, 63% have no affiliation (compared to 24% of over 75s) and 37% were not raised within a religious faith (compared to just 5% of over 75%s), a majority in both groups said that they do not attend religious services (aged 18-24: 68%; aged 75 and over: 59%).

One Response to Religion and the British Social Attitudes 2015 Survey