The British Social Attitudes (BSA) 2016 survey dataset has been released via the UKDS. This post updates the long-term religious data available from the BSA surveys.

Figure 1 charts the data on affiliation for the period 1983-2016. Key features include the long-term decline in the proportion identifying as Anglican (which stood at 40% in 1983 and had declined to 15% in 2016), increased identification with non-Christian faiths over recent decades (3% in 1983, 6% in 2016), broad stability in levels of Catholic affiliation (10% in 1983, 9% in 2016), and the increase in the proportion with no affiliation (32% in 1983 and 53% in 2016). The proportion of other Christians has also increased over time, from 15% in 1983 to 17% in 2016. However, the composition of this group has shifted. The proportion identifying as non-denominational Christians has risen over time, with a decreasing share professing a denominational affiliation – in particular, with the Nonconformist churches. 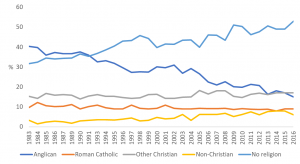 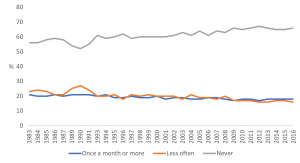 Looking at patterns of attendance in more detail, Figure 3 charts, over time, the proportions of Anglicans, Catholics and other Christians attending church on a frequent basis. Clearly, Catholics and other Christian have consistently reported higher levels of regular churchgoing compared to Anglicans. In 1983, 55% of Catholics and 47% of other Christian reported attending church frequently. In 2016, the proportions had fallen to 43% of Catholics and 38% of other Christians. Anglicans actually show something of an increase in regular attendance, based on the full duration of the BSA data. It stood at 18% in 1983 and, perhaps somewhat surprisingly, increased to 24% in 2016 (the highest proportion recorded by the BSA), having previously stood at 18% in both 2014 and 2015. Overall, though, those belonging to non-Christian religions show the highest level of regular attendance at services. In nearly all recent surveys, a majority of this group has reported attending on a frequent basis (51% in 2016). 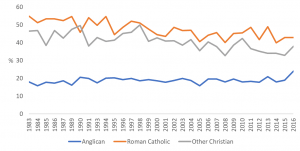 5 Responses to Religion and the British Social Attitudes 2016 Survey