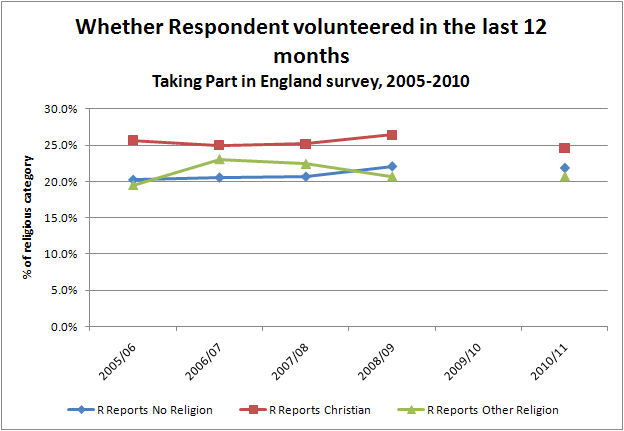 This post is just to flag up the release of the most recent Taking Part in England dataset, covering January-December 2010. This survey is sponsored by the Department of Culture, Media and Sport and asks an unusually large sample their leisure and cultural pursuits. It also asks questions about friendships, political participation, and volunteering.

Religion is captured in the Taking Part surveys by a religious affiliation question along the lines of the recent Census, and a question on whether the respondent currently practises that religion. I posted about the survey here last year: DCMS also provides an online analysis tool, NETQuest, for TP users.

DCMS has compiled a report on the 2010 dataset, as well as some useful crosstabulations and trend data using the complete set of datasets. I have just drawn up the graph above from their uploaded tables on volunteering available here. There are also reports and tables available on digital participation, and cycling and swimming proficiency.

There are many possible reasons for this: older people are also more likely to say that they volunteer, which is also given in thestables, and we know that the older are more likely to report a religious affiliation: this may be the key driver.

Nevertheless, Robert Putnam and David Campbell’s American Grace found that in the US those who were religiously-active were more likely to volunteer in all fields apart from the arts. (See the volunteering category at the American Grace blog; there is also a lot of coverage of American Grace at their Social Capital blog.)

It may be that the situation is similar in the UK. There is a good deal of work to be done in this area, and a lot of data are available. The 2008 British Social Attitudes survey included three items on volunteering:

How many times, if any, did you volunteer in the past 12 months? By volunteering, we mean any unpaid work done to help people besides your family or friends or people you work with.

Could you tell me whether you have done any volunteer work for a religious group or place of worship in the past 12 months? any unpaid work done to help people besides your family or friends or people you work with.

Before that, the 1998 and 2008 surveys included questions on charitable, political and religious volunteering, which could be broken down by religious affiliation and frequency of attendance.

Volunteering is also covered in the European Values Study and European Social Survey.

Substantial research programmes already exist to study volunteering, social capital and philanthropy. The task remains for researchers in the sociology of religion to explain the causal mechanisms through which religiosity affects voluntary effort, and to suggest what the impact of secularisation and growing religious diversity is likely to be.