Getting Data on Scientology

Scientology appears to be in the news at the moment so it seems timely to offer some ideas on how to count Scientology in the UK.

Scientology isn’t recognised as a religion by the Charities Commission at present, although this may or may not change in future depending on how the Charities Commission define religion. On the one hand, the requirement for a religion to have a ‘supreme being’ was attenuated in the Charities Act 2006, but the need to demonstrate a ‘public benefit’ generated by each religion has been tightened. This is important for religious groups since such recognition would allow remission from local property taxation (the ‘business rate’).

Even so, 1,781 people in England and Wales used the ‘write in’ provision of the 2001 Census to state that they were Scientologists.

Little independent data are available on Scientology, although some estimates are available in Religious Trends 7 (2007/08). This estimated that in the UK in 2006 138,000 people had taken a Scientology course, while there were 15 active groups in existence. It was also estimated that there were 460 elite ‘Sea Org’ leaders in the UK, who had dedicated their lives to the movement (pp. 10.3, 10.4).

This leaves a few options for gathering further data. First, it’s possible to use Google Trends to look at how Scientology is trending among internet searches. Here are a couple of graphs to show how the number of UK searches including the word ‘Scientology’ has varied over the last 12 months and 30 days.

Google Trends is a fascinating tool which may help researchers gather data on less mainstream groups, or those which are less formally organised. Google Trends analyses a sample of Google web searches to estimate how many searches have been done for the term you are investigating relative to the total number of searches over time. The results are given as a Search Volume Index graph, and the data can be exported as CSV files (readable by Excel) for further analysis.

Two scaling options are available, ‘relative’ and fixed’. Relative scaling means that the results are scaled to the average search traffic during the time period selected. If you select ‘the previous 30 days’, the data for Scientology would be given relative to the average of all search traffic for Scientology during those 30 days. If there is a spike to 5, the traffic at that point is 5 times the average for the 30-day period.

Alternatively, in fixed mode, the data is scaled to the average traffic for that term during a fixed point in time, usually January 2004, which is set to 1.0. The scale basis then doesn’t change with time, which allows us to compare different time points. (This option however is only available as a CSV export rather than online viewing as a graph.)

Google Trends also provides a link to relevant news stories for the peaks, and thence to ‘News Archives’, both articles ranked by importance, and a timeline. This appears to plot the frequency of mentions in the news archives for the term, over time. For Scientology, the peak appears to be the mid-1950s, shortly after the organisation was established in 1964. However, this data is only available as an online graph and I’m not clear at this point how the graph was created – the results page notes that ‘dates associated with search results are estimated and are determined automatically by a computer program’. It would be interesting to have the data exportable as for Google Trends – but for now I’ll include an extract of the printscreen to illustrate how it looks (click to increase the size of the image). 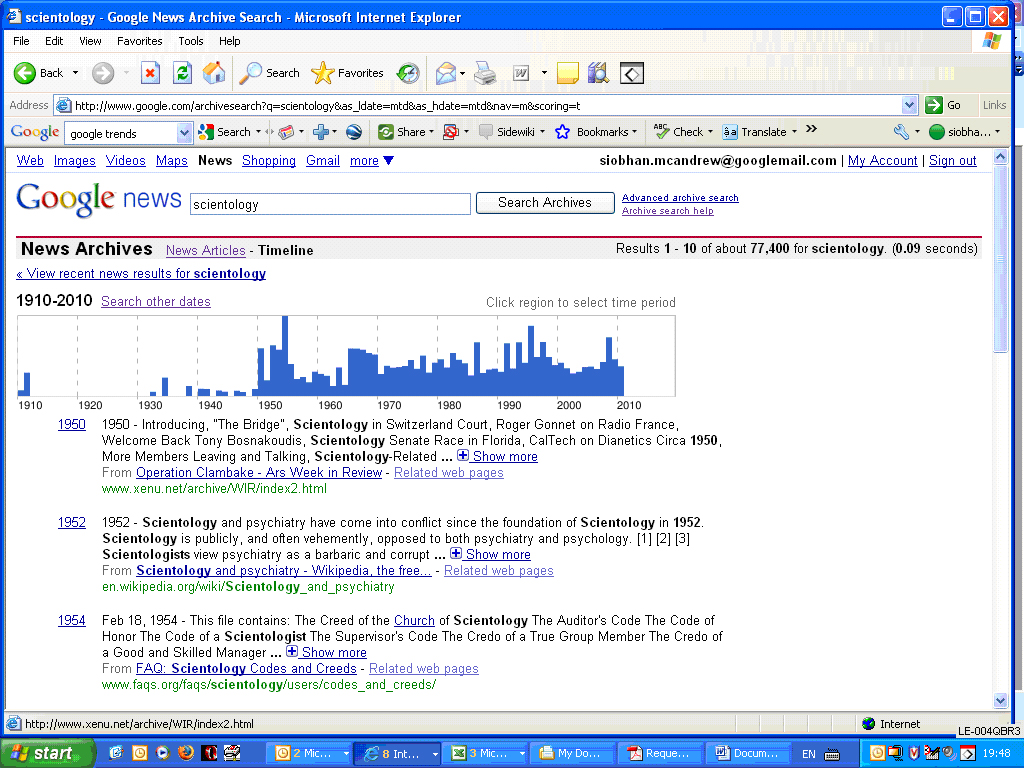 Much more is possible with the Google Trends search. For example, you can restrict the search to specific regions, or compare trends for different search terms.

A further option is a tool to investigate ‘trending on Twitter’. We increasingly hear in the news that a certain term or hash is trending on Twitter, and it’s possible to actually look at the trends. Trendistic is one useful website. Here is a search using just the term ‘Scientology’, with the following results. 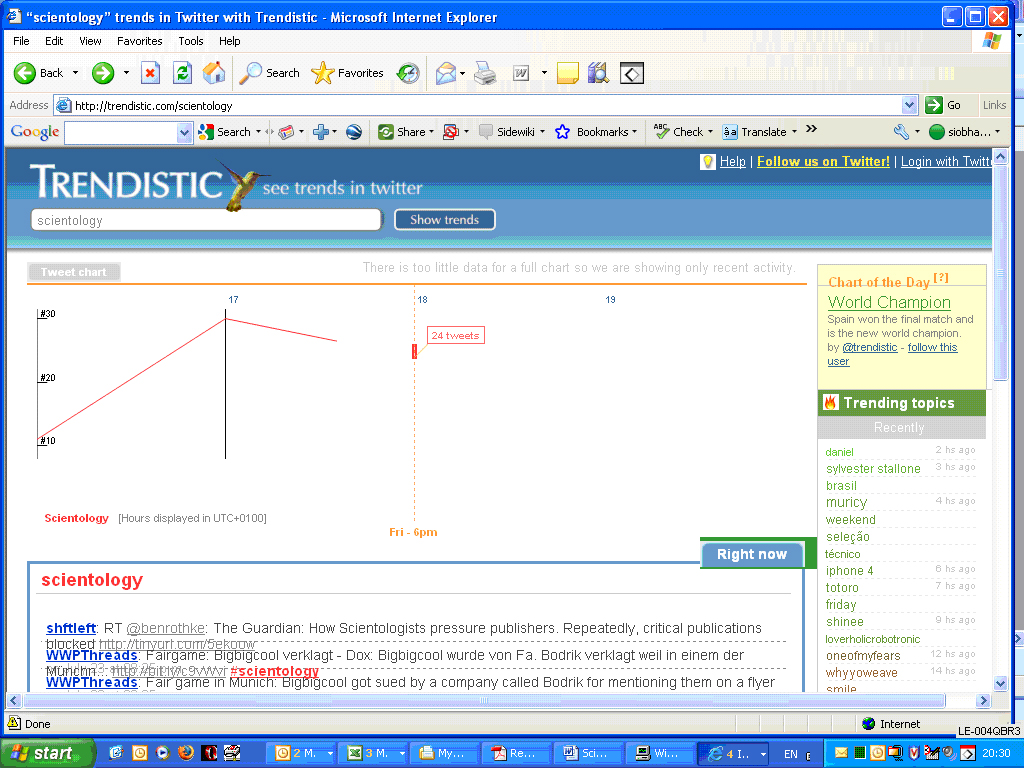 Scrolling over the graph shows that the number of tweets on the hour (6pm, 7pm, 8pm) are also available, although not displayed graphically. Charts can be embedded into users’ own websites, which is handy, although the data in CSV format (as with Google Trends) would also be welcome. Because the results for ‘Scientology’ look rather thin, I’m also giving an example of results for ‘Jesus’.

These look like gimmicks, but the serious point is that a researcher following news coverage of particular religious group, or investigating hard-to-reach groups, could use these tools alongside more qualitative approaches to flesh out their intuitions on the religion’s significance.

One Response to Getting Data on Scientology