It was a great pleasure to see the launch of Stephen Bullivant’s report, ‘Contemporary Catholicism in England and Wales‘, at the House of Commons on 24 May 2016. I first heard of Stephen’s interest in a data-driven approach to the question of Catholic vitality in 2013, when the British Academy issued a call for currently practising academics to expand their skillset by learning quantitative methods. Stephen was successful both in being awarded a British Academy Quantitative Skills Acquisition Award and also in thereafter becoming a quantitatively-proficient sociologist with quite alarming ease.

It’s wonderful to see Stephen’s progress as a quantitative sociologist, having begun his academic life in philosophy and theology, and a tribute both to the BA scheme and his own commitment to enriching both conceptual and empirical frameworks for understanding contemporary religiosity. He visited the BRIN team at Manchester, and attended some classes and pointers, but ultimately needed little formal training. So it’s very encouraging to see the resulting contributions to both academic and public debate in this fashion.

Having read the report with great interest, we next need to probe further the drivers of change in contemporary Catholicism. The report presents an array of estimates of the Catholic community in Britain, and one of the clearest findings is that, while those raised Catholic are more likely to ‘stick’ than those raised Anglican, a very large proportion of those raised Catholic still leave the faith. So, why has lapsation occurred? 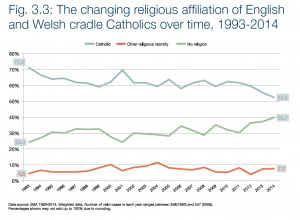 A good deal of work shows that the drift away from religion in Western societies is generational in nature: those born in the 1930s who stayed religious tended to see that about half their children born in the 1950s and 60s retained religion, and in turn they saw about half their children retain religion. We also have witnessed fairly high rates of immigration from quite religious societies, which has provided a countervailing trend. And there are some people whose families have been secular for generations. So in that regard, many people in Britain have a religious background, with links to faith communities via parents and grandparents; a significant but small minority is highly religious; and another significant minority is highly secular.

But what of the Catholic community in particular? For some separate research Stephen and I are hoping to take forward, the Nuffield Foundation funded some work to digitise and re-analyse a random sample survey of young people in the 1950s, where young Catholics, mostly Irish but sometimes Polish, Italian, or Afro-Caribbean, were well-represented. This was large enough to allow detailed analysis of religiosity and lapsation among a critical social generation.

From this we have found that for young English people as a whole, attending church less often over the course of their adolescence was predicted by:

We also see that those who reported no religious affiliation were more likely to be members of political associations, which suggests that some exchanged religious identities for political identities.

Among Catholics, however, of those who attended church less often in their later teens and early 20s than they had in childhood, very little predicted lapsation except not being a member of a social club or other association. Perhaps lapsation can be understood by the rise of the consumer society, and personal independence, through work or marriage. Some of it therefore may be down to value shifts, from values stressing conformity to those stressing personal choice.

Catholics were, however, less likely to drop their attendance compared with Anglicans and others, backing up Stephen’s finding that religious retention is relatively good. We don’t know why there is this difference yet. My suspicion is that doctrine is not the major factor – and that it is that it is something to do with the family and community environment, and moral socialisation in the family rather than the appeal of church services themselves, or doctrinal questions. Catholics were more recent immigrants in the 1950s and 60s, and there was community and parental pressure to attend.

We do see generational change in the young ethnic minority British too, in the present day – in the wider Christian, Hindu and Muslim communities. Those who are second generation British rather than first show slight shifts in communal practice such as mosque attendance, and clearer shifts in private prayer.

The strong showing which Stephen reports here of ethnic minority Catholics in terms of attendance is not a surprise – we know from a great deal of US work, and some British work, that religious communities are important for immigrants and people of immigrant origin because, as termed by Hirschman, they provide refuge, respect, and resources.

These are just some questions which we could probe further. Others relate to the importance of education for religiosity. The sociologist Sarah King-Hele analysed the BSA for 1983-2008 and distinguished different social generations, from those born in the 1910s to those born in the 1970s. She found as follows:

All in all, Bullivant’s paper is of great interest and his longer-term research programme extremely promising. There has been a great deal of scholarly interest in British Islam, and the experience of people of visible ethnic minority background. We can learn a lot, however, about earlier waves of immigration and how religion – including Catholicism – worked to help people become established as British citizens. To paraphrase the American moral psychologist Jonathan Haidt, religion both binds and blinds. Our task as social scientists is to understand the drivers and consequences of both.