It’s my pleasure to announce the publication online of a survey dataset, the 1957 Youth Research Council Survey of Young People’s Religion and Lifestyles (SN 7933). This is a project on which I’ve worked for some time, to digitise and make more widely available a large-scale survey of English youth fielded almost 60 years ago.

This project was originally of BRIN inspiration: Clive Field serves as a trustee on the Pastoral Research Centre Trust, a social research institute established and directed by the demographer and religious sociologist Tony Spencer. Clive suggested this project as one where digitisation would help preserve a valuable and high-quality data source both for wider use by sociologists of religion, and for the longer term. He summarised the data source as follows in his 1987 work on religious data sources:

‘[A] major study… conducted in January and February 1957 by the Roman Catholic Young Christian Worker movement with technical assistance from the [Newman Demographic Survey]. Interviews were held with 8,196 persons aged fifteen to twenty-four living in randomly selected streets of twenty-eight London boroughs and thirty English provincial towns and cities with a population in excess of forty thousand. The full questionnaire, which was given to all non-Anglican respondents and to thirty per cent of the five thousand Church of England adherents, covered socio-demographic characteristics, belief in god, Christ heaven and hell, attendance at Sunday school or catechism, public worship and Holy Communion, and confirmation. Proper weighting (to correct for the over-representation of Catholics and fifteen to nineteen year olds) and analysis of the data was never completed on account of shortages both of time and money, and the only significant publication to have arisen from the project was a special double issue of New Life’ (Field 1987: 263).

The survey was conducted jointly by the Young Christian Workers (YCW) and the Newman Demographic Survey (NDS) under a joint committee, namely the Youth Research Council. The YCW interest lay in gathering data for the YCW’s international congress in Rome. It had an activist mission: its motto then and now was ‘See, Judge, Act’. National associations were asked by the YCW headquarters in Brussels to report on young workers in their countries. Frank Lane (1926-1993), then a full-time organiser for the YCW and later to become its chief administrator in England, contacted the Newman Demographic Survey for advice.

Tony Spencer established both the Newman Demographic Survey, in 1953, and the PRC as a legacy organisation in 1964. Inconsistency of funding and programmatic independence caused difficulties for the NDS, as detailed on the PRC website. Spencer managed much of the work of the NDS and PRC alongside a civil service career, military service, and then an academic career at Queen’s University Belfast. He also gave service to the wider community as founder of Lagan College, the first integrated school in Belfast, established in 1981. More on the founding of Lagan College can be learned here.

The YRC 1957 study was a particularly attractive project for many reasons. Commercial polling had come to Britain in the 1930s via Gallup, and government surveys were in their early stages in the 1950s. Among academic studies, the Glass mobility study of 1949, the Family Expenditure Survey of 1961, and British Election Study from 1963 were the first major examples. So it hails from the earlier years of survey research in Britain, and having this dataset available to the scholarly community helps turn this period from one of historical interest to one of social scientific interest. What are apparently the ‘relics of history’ are amenable to standard analytic tools and arguably of contemporary interest.

Even in the US, where the quantitative study of religion is firmly established, the earliest survey data available on religion are Gallup polling data from 1939. Notable early US studies include Gerhard Lenski’s sample of 656 Detroit residents in 1958, reported in his 1961 classic, The Religious Factor, and the first large-scale surveys of American religiosity launched in 1963 by Charles Glock and Rodney Stark.

The detail it provides on young English Catholics is also important. It is now largely forgotten that Irish immigrants were once seen as a social and cultural threat, and it may be that analysis of these data will help shed light on the successful integration of a distinct religious minority.

Further, it is of good quality for a study of its time and comparable quality would be very expensive nowadays when young people are hard-to-reach by survey researchers. There is lots of evidence in the archives of care and thought given to sampling and questionnaire design, with further details in the survey’s Technical Report. Expert advice was sought from survey researchers in government and at Gallup, and also from the Director of Mass Observation. Of the towns and boroughs which were selected for the stratified sample, a 2 per cent sample was taken of those aged 15-24.

The survey was also fascinating in terms of how it was produced. There was almost no funding available – £200 provided by the YCW in 1956, worth about £4500 now. That had to cover the printing of questionnaires and tabulation of the responses for computer analysis as well as the analysis itself. The survey was fielded by volunteers from the Young Christian Workers, mostly young people in their teens and early 20s, with little free time outside work. The survey design, coding up of responses and analysis of the headline results depended very much on the NDS and its advisers working in an entirely voluntary capacity, in the interests of gathering data on youth religiosity and particularly Catholic religiosity at a time of high immigration from Ireland in particular. A similar study nowadays – face-to-face, aiming for good coverage of minority communities – would require funding of several hundreds of thousands of pounds, according to one reviewer of the project.

More importantly, the dataset provides an important insight into youth lifestyle and attitudes to religion in late industrial society. This period is now slipping farther back in British memory, and yet is still part of our present: the majority of that cohort is still alive. Accordingly, the survey is both history and social science, informing us of the youth of the Silent Generation, which is now enjoying retirement or still working, still volunteering and politically-active, and caring for dependents. The target population is now aged 74 to 83. Their social attitudes are borne of memories of wartime and post-war austerity, strong trade unions and a large manufacturing sector, almost full employment in their formative years, and for a lucky few, the provision of free university education. While the late 1950s are commonly thought of as the age of beatniks and rock’n’roll, there is actually little evidence of widespread cultural change – that apparently awaited the 1960s – although 1957 was arguably the first year when television dominated the radio. In providing additional data on what young people were doing on Sundays, and the societies and clubs they belonged to, the survey also tells us of youth leisure and civic life at the time.

For completion of the digitisation project, I was very lucky to be awarded what was, coincidentally, a similar amount of funding by the Nuffield Foundation to that originally provided by the YCW. The practical side was interesting in that there were not many exemplars; very helpful advice on data capture was provided by economists Andrew Newell and Tim Leunig.

On beginning the project, it also seemed that there was a certain amount of data loss – to damp and some boxes of forms were lost so that about half the London boroughs are not represented. The IBM punchcards were also lost over the years. 5832 responses survive.

An example of an original form is given below (click on the images for enlarged versions). Many written-in answers had been coded by the original coding team, notably one Mrs Jane Platts, whose work in coding occupations was stellar. The closed responses had also been ringed by the interviewer, and again back at the NDS offices where checks were made for consistency. The excellent Digital Divide Data took receipt of the set of scanned images and recorded responses in an Excel spreadsheet for further processing. 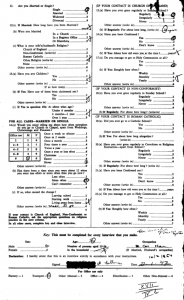 This spreadsheet then required further cleaning and checking (and the written-in responses to religious questions remains to be done). The published dataset, available in both SPSS and Stata formats, includes the close-form variables; written-in responses to questions on how time was spent last Sunday, associational memberships and occupation; a number of derived variables; full variable labelling; and has the different types of missingness identified. The Technical Report explains further.

Finally, I created poststratification weights using 1951 Census data together with Spencer’s own estimates of the 15-24 Catholic population of England.

In further posts I will give some examples of individual responses to particular questions to help give a flavour of religious attitudes at the time. There is also the potential for interesting qualitative work drawing on the written-in responses, marginalia and survey paradata.

For now, thanks are due the Nuffield Foundation for funding digitisation costs (SGS/37651). Some of this work was also completed while I was Marston Research Fellow at the University of Manchester, supported by the Marston Family Trust, for which I am extremely grateful; this dataset will inform further work on youth socialisation. The UK Data Service, particularly Louise Bolger and Karen Dennison, were very helpful in advising on preparing the dataset for publication.

For their technical and practical help in digitising the survey, and agreement for granting of copyright clearance for publication online, thanks are also due to:

Clive Field OBE, Director of British Religion in Numbers and Honorary Research Fellow of the Universities of Birmingham and Manchester

David Voas, Director of British Religion in Numbers and Head of Department of Social Science at UCL Institute of Education

Particular thanks are due to Tony Spencer, whose extraordinary efforts led to the fielding and then preservation of the survey. In turn, in the report of the survey’s headline results made in 1958, he paid tribute to the numerous volunteers who knocked on doors interviewing respondents:

‘to the National Organisers and Regional Leaders who spent weeks travelling the country, preparing street lists by day and briefing interviewers in the evenings: to the Y.C.W. Headquarters Staff who administered and maintained the momentum of the work: and above all to the many hundreds of members of the Y.C.W. and of the Legion of Mary, Knights of St. Columba, the Cell, the Children of Mary, youth clubs, teachers and training colleges and University students, who spent night after night and several week-ends, in wet or cold weather, calling at every house in a particular street, doing one or two interviews and then going on to the next listed street, perhaps some way away, and returning another day to call again at houses where everyone, or all of the young people of the household were found to be out’ (Spencer 1958: 8-9).

In terms of papers analysing data from the survey:

Siobhan McAndrew and Lindsay Richards, ‘Nothing to Do in the Affluent Society’ (Working Paper) examines youth leisure and associational memberships in terms of religious affiliation. Further work is underway with Stephen Bullivant looking specifically at religious practice and belief.