The Nationality of Numbers

As interesting as studying religion in Britain is, we often want to know to what extent what we find here is similar or different to the results from other countries. However, a problem with cross-national comparative studies of religion (and other social opinions, attitudes and behaviours) is that national context can make a huge difference to the meaning of certain concepts.

In my research, I compare religiosity in Britain, the Netherlands, Denmark and Ireland, and find large differences that are only partly due to differences in what we would call “levels of religiosity” and just as much to do with differences in historical and political contexts. For example, more than eighty percent of the Danish population are members of the Church of Denmark, even though only a tiny proportion attend church regularly. Like in other Scandinavian countries, a large proportion of Danes seem to be members because they never bothered to opt out rather than as a result of a conscious decision. 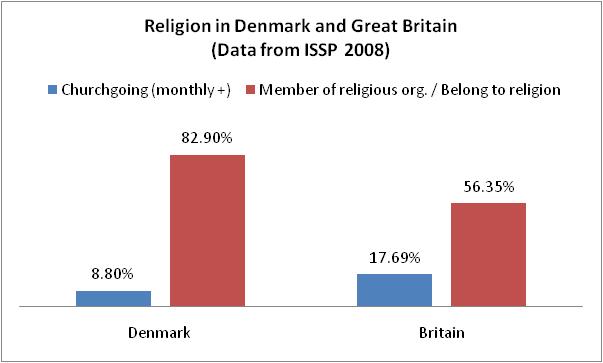 This is not to say that church affiliation is a meaningless variable. Perhaps this is not “religion” in the pure sense of the word, but as researchers we are often interested in how different expressions of religiosity have different connotations. Qualitative research has revealed that even as church membership is extremely common in Denmark despite otherwise widespread secularism, it is still important to many people in Denmark  as a way of expressing their identity or cultural heritage, supporting the maintenance of church buildings and last but not least because they want church services at important rites of passage such as weddings and funerals.

Nevertheless, the problem remains: how can such statistics be meaningfully compared to those of for example Britiain, where church membership is an expression of personal religiosity to a much larger extent? There is no easy answer to this. In studies involving a large number of countries one can control for national context through multilevel analysis. The problem here is that even when one does observe national differences it can be difficult to understand what these differences signify.

In smaller comparative studies such as my own, involving only a small number of countries, there is no statistical method available. Rather, the only option is to supply the quantitative analysis with rich historical and contextual analysis of each case country:  the relationship between state and church, the levels of religiosity, the changes in recent years and so on.

Knowledge of the national context informs us not only of why one can observe differences but also what variables it is most meaningful to compare in the first place. Sometimes context dependency makes like for like comparisons inadvisable. In the above example it would make more sense to compare Danish church membership with British self-stated “belonging to a religion” rather than British church-membership.   In other words, even for larger comparative studies, contextual knowledge is an important supplement to statistical analysis.

Ingrid Storm is a PhD student at the Institute for Social Change, University of Manchester