Anglicans and Attitudes towards Gay Marriage

In a previous post I looked at the long-term attitudes of religious groups in Britain towards the acceptance of same sex relations, showing a clear liberalisation of public opinion in recent decades. The proportion of Anglicans who thought that sexual relations between adults of the same sex was either ‘always wrong’ or ‘almost always wrong’ had fallen from 69.7 per cent in 1983 to 37.4 per cent in 2010. While Anglicans may be more accepting of homosexuality in general, what about their attitudes towards more specific issues of gay rights – particularly those which more directly affect their own church and established social institutions?

This post focuses on the attitudes of Anglicans towards the issue of gay marriage, on which the coalition government set out proposals earlier this year, and which is causing controversy within and between religious institutions and political parties. The issue has led to public exchanges of differing views between leading members of the coalition government (including Prime Minister David Cameron and his deputy, Nick Clegg) who support the reform, and leaders of the Church of England – as well as from other denominations and faiths, who oppose it. The Church of England, in particular, has said the reform constitutes one of the most severe threats it has faced for centuries. Two groups have been set up – the Coalition for Marriage and the Coalition for Equal Marriage – to campaign on opposing sides of the debate. The issue also has potential implications at the grassroots level, as in several recent ComRes CPANEL polls, undertaken for Premier Media and Coalition for Marriage, significant proportions of Anglicans – as well as adherents of other Christian denominations – have stated they would be less likely to vote for the Conservative Party as a result of same sex marriage laws. It is nothing new, of course, for the Anglican Church to be internally split on issues of gay rights and related legislation. Indeed, existing scholarly research has shown that Anglicans differ in their (dis)approval of homosexuality, with their views shaped by both personality traits and theological orientation.

This post uses a nationally-representative opinion survey of British adults, undertaken by YouGov in March 2012, to assess the overall distribution of opinion of Anglicans on several aspects of the gay marriage issue, as well as to examine which groups of Anglicans are more likely to be supportive or opposed to liberal reforms in this area. The overall survey sample consisted of 1,707 respondents, of whom 458 were Anglican. The survey asked a range of questions about the gay marriage issue and same sex relations, but three in particular are examined here. They relate to: attitudes towards the validity of same sex relations; attitudes towards the legal recognition of same sec relationships; and views towards the Church of England’s stance on the issue of gay marriage.

First, TABLE 1 compares the overall distribution of opinion on these three questions for the full sample and Anglicans only. Anglicans are less likely than all respondents to believe that same sex relationships are as valid as heterosexual relationships (52.4 per cent compared to 61.7 per cent); though still a majority think they are as valid. The next question, on legal recognition, allows respondents to express opposition for same sex marriage while approving civil partnerships, which became law in 2005. They could also reject both forms of legal recognition. Again, we can see that Anglican are much less supportive of same sex marriage (24.4 per cent are supportive compared to 42.8 per cent of the full sample). Anglicans are more in favour of civil partnerships than the full sample, as well as more likely to oppose any form of legal recognition for same sex couples. The third question asked specifically about the Church of England’s stance on the issue, in terms of whether respondents thought it was right or wrong to defend marriage as an institution exclusively for heterosexual couples, what is usually labelled ‘traditional marriage’. Around two-thirds of Anglicans in the sample agreed with the Church of England’s position, compared to less than half of the full sample. Still, around a quarter of adherents were in disagreement, believing their church to be in the wrong. 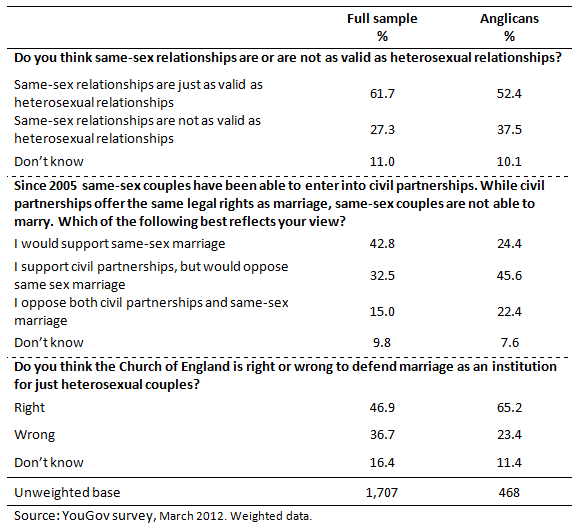 Second, TABLE 2 focused on the Anglicans in the sample, in order to ascertain which groups are more likely to have pro-‘gay rights’ positions on the three questions. Figures are shown on the basis of the following social and political characteristics: gender; age group; education; and political party supported. The three columns report the proportion of respondents in each category offering pro-gay rights responses: that is, the proportion believing that same sex relationships are as valid as heterosexual ones; the proportion that supports same sex marriage; and the proportion that believes the Church of England are wrong on the issue. We can see that particular groups are consistently more likely to offer more liberal views on the three questions (highlighted in bold). These are women, those aged 18-29 years old, and Labour Party supporters (closely followed by Liberal Democrat partisans). Perhaps surprisingly, those with a degree-level education were not most likely to have the pro-gay rights views in response to these questions; instead, those with A-Levels or other below degree-level qualification were more likely to show liberal opinions. In relation to age, the evidence supports existing research showing that older Anglicans are more likely to hold anti-gay attitudes. 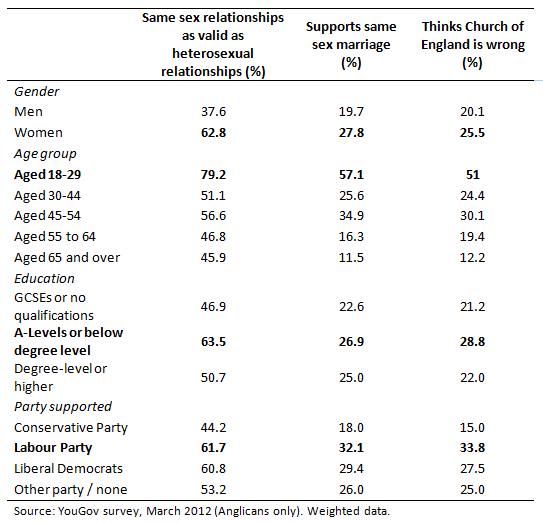 Of course, while the evidence reported in TABLE 2 gives an indication of some dividing lines amongst Anglicans in their views of same sex marriage, one potentially important source of attitudinal variation is religiosity. Data on religiosity is not available in the YouGov survey used so far, but we can turn to the 2008 British Social Attitudes survey, which asked a similar question on the legal recognition of same sex relationships and had different indicators of religiosity. TABLE 3 shows, for attendance at religious services and personal importance of religion, the proportions who support same sex marriage, favour civil partnerships only, or who are against all forms of legal recognition for same sex couples. The measure of attendance at religious services is divided into those who attend reasonably frequently (at least once a month) and those who attend infrequently or not all all. The measure of the personal importance of religion is divided between those who say it is ‘very important’ or ‘moderately important’, and those who report it is ‘slightly important’ or ‘not at all important’. Looking first at attendance, we can see that those who attend religious services regularly are less likely to support same sex marriage and more likely to favour no form of legal recognition. A similar pattern is evident for the personal importance of religion: again, those for whom their faith assumes a greater prominence in their daily life are less supportive of same sex marriages and more likely to believe that there should not be any form of legal recognition. On both of these alternative indicators of religiosity, then, those who exhibit greater religiosity tend to have less liberal views on this contemporary gay rights issue. 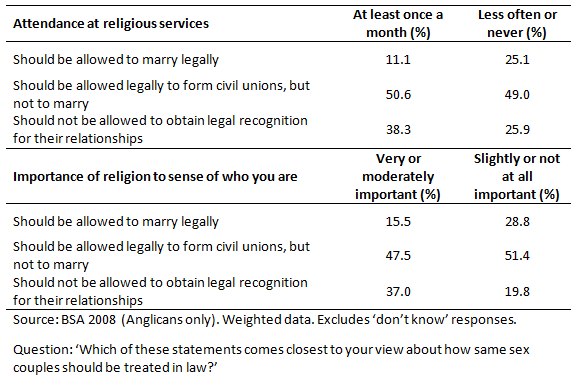 Department of Politics and International Relations

This entry was posted in Uncategorized. Bookmark the permalink.

8 Responses to Anglicans and Attitudes towards Gay Marriage