As well as looking at behaviour and attitudes in relation to the 2010 general election (participation, method of voting, party voted for, etc.), the EMBES survey contains a wealth of attitudinal data relating to long-standing or more recent political issues in Britain. One of these is the involvement of British military forces in the conflict in Afghanistan, which has been on-going since late-2001.

It clearly represents one of major foreign policy issues of recent times, even though it was never as politically controversial, both here and on the international stage, as was the invasion of Iraq in 2003, which engendered divisions with and between the political parties and in wider society. This post reports attitudes towards Britain’s involvement in the Afghanistan war by religious affiliation. It can be read in conjunction with this previous research note on attitudes towards the wars in Iraq and Afghanistan by religious affiliation, using data from the British Election Study 2009/10 internet panel survey, which sampled the wider British population.

As with my previous posts this week covering the EMBES (see here and here), the data reported below are based on questions answered as part of the self-completion section (involving 2,787 respondents overall). The EMBES carried seven questions relating to various aspects of Britain’s participation in the war in Afghanistan, one of which is not included here since it asked explicitly about current perceptions of how the war was going. One question asks about approval or disapproval of Britain’s role in the conflict (Table 1) and another about the longer-term prospects of defeating the Taliban (Table 2). The remaining four questions comprise a battery of related items (shown in Tables 3-6). These ask about positive and negative aspects of the conflict.

Table 1 also has two subsidiary tables: Table 1a, which provides responses by Christian denomination; and Table 1b, which gives responses by Muslin tradition. Question wording is provided under each table. To aid presentation of the data in tabular format, the original response options have been collapsed into broader categories (not applicable for Table 3).

Please note that percentages are based on weighted data and sum down each column (except for Table 1a, which sums across the rows). The final column in each table provides the unweighted number of cases. Table 2 provides weighted mean scores for a question using a scale ranging from 0 through to 10 (unweighted cases are reported in the bottom row). As before, the religious affiliation categories are: No religion, Christian, Hindu, Muslim, Sikh and Other. This represents a minor modification of the religious affiliation variable available in the EMBES dataset. The religious affiliation categories are based on two EMBES questions:

‘Do you regard yourself as belonging to any particular religion?’

Tables 1a and 1b are based on follow-up questions asking about the particular denomination or tradition belonged to if a respondent says that they are Christian or Muslim. Some interesting differences in opinion are noted below.

Tables 1, 1a and 1b
There are clear differences in levels of approval and disapproval of Britain’s involvement in Afghanistan by religious affiliation, as shown in Table 1. Muslims are least likely to approve (7.6 per cent), with Hindus and Sikhs showing the higher levels of support (26.5 per cent for both groups). Muslims show the highest level of disapproval (at 63.1 per cent) followed by those of no religion (at 51.9 per cent). Also, note that the categories vary somewhat in the proportions offering no opinion (from 8 per cent for those of no religion to nearly a fifth of Hindus).

Table 1a, showing responses by Christian denomination, shows the highest levels of approval are expressed by Anglicans, members of Pentecostal churches and those in the ‘other’ Christian category (in the 25-30 per cent range). The highest levels of disapproval reach around 60 per cent, expressed by Orthodox Christians and (Seventh Day) Adventists. Note that the Orthodox category consists of very few cases. Again, the proportions offering no opinion vary across the categories (from 5 per cent to over 18 per cent).

In Table 1b, showing responses by Muslim tradition, Sunni Muslims and those who do not belong to a particular tradition express the highest levels of disapproval (around 64-5 per cent) compared to 44 per cent for Shi’a Muslims and 50 per cent for those belonging to other traditions. The vast majority of Muslims in Afghanistan practice Sunni Islam. Note that the Shi’a and ‘other’ categories are both based on relatively small numbers of respondents. In the EMBES survey, 83.4 per cent of those who said they were Muslim reported belonging to the Sunni tradition in the follow-up question. 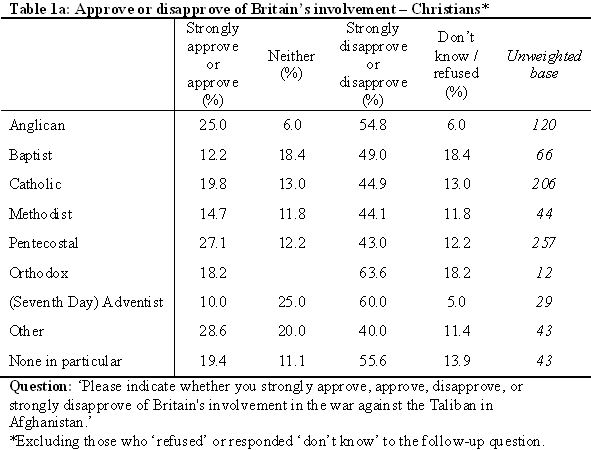 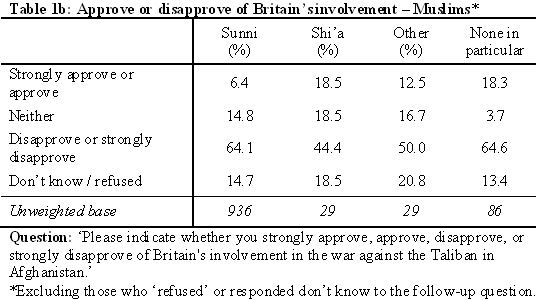 Tables 3-6
Tables 3 to 6 report attitudes towards a related series of questions, two of which asked about positive aspects of Britain’s participation in the war in Afghanistan (Tables 3 and 5), and two of which asked about negative implications of Britain’s involvement (Tables 4 and 6). The general picture is that, across categories, respondents are more likely to disagree with the positive aspects and more likely to agree with the negative implications. Again, however, there are clear differences in views by religious affiliation categories.

In Table 3, Muslims and those belonging to other traditions are least likely to agree that Britain will benefit in the long term from its involvement (at 9.4 per cent in both cases). For all other categories, nearly a fifth of respondents express agreement with this question. In Table 4, it is Christians and Sikhs who are most likely to agree that Britain’s involvement threatens their safety and that of their families. In Table 5, Hindus and Sikhs are most likely to concur that is a moral case for British involvement in Afghanistan, with Muslims least likely to express agreement with this statement (just 15.2 per cent). In Table 6, there were high levels of agreement with the statement about the war seriously damaging British interests around the globe. Majorities of Muslims, Sikhs and those of another religion agreed. Apart from members of some other religion, less than a fifth in each category disagreed. Across Tables 3-6 there is considerable variation in the proportions in each category refusing to answer or offering a ‘don’t know’ response (combined rather than shown separately). The highest proportions tend to be found amongst Muslims and Hindus (usually in the range of 20-25 per cent).

Finally, BRIN readers who are interested more generally in looking at public opinion in Britain and elsewhere towards the war in Afghanistan are directed towards the links for relevant data held by the following opinion poll organisations: