The surveys use different types of questions in order to gauge attitudes towards religious groups, and I give some summaries here. For each survey, the data are weighted so that the results are demographically representative.

1. European Values Study (EVS)
The EVS includes a British sample as part of its multi-national focus. It has undertaken surveys in 1981, 1990, 1998 and 2008. In each survey it has asked this question:

‘On this list are various groups of people. Could you please sort out any that you would not like to have as neighbours?’

It has asked about a range of social groups, not just those belonging to different religious faiths. Also, the religious categories asked about have varied across surveys. Muslims and Jews have been asked about in every survey from 1990 onwards, while other groups have been included in just a single survey. Table 1 gives the proportions (%) in each survey who mention that they would not like to have a particular religious group as neighbours.

Table 1 shows that, for the two groups asked about in nearly every survey – Muslims and Jews – the proportions who would not want them as neighbours have fallen over time. For Muslims, it has declined from 16.8 per cent to 12.2 per cent; for Jews from 7.2 per cent to 3.1 per cent. In 1981 a broader category – ‘minority religious groups’ – was used, and around a fifth expressed disapproval (21.6 per cent).

Further information and datasets are available at http://www.europeanvaluesstudy.eu/

The Pew GAP has since 2004 asked about attitudes towards Jews, Muslims and Christians in its cross-national surveys (with the exception of the 2007 survey). For each of these groups, respondents are asked:

Responses to this question for the most recent survey – undertaken in 2009 – are shown below in Table 2 (for the British sample). Attitudes are most favourable towards Christians (82.2 per cent respond ‘very’ or ‘somewhat’) compared to Jews (75.4 per cent) and Muslims (64.5 per cent). Respondents are more likely to offer a ‘don’t response’ for Jews and Muslims. Again, interesting comparisons can be undertaken with other countries included in the GAP surveys.

The BSA 2008 survey asked about feelings towards various religiously-defined groups. It used a series of ‘thermometer’ scales – ranging from 0 through to 100 – in order to measure whether people feel warm (or cold) towards particular groups. Higher scores (i.e. above 50) represent warmer feelings.

In their recent study (American Grace: How Religion Divides and Unites Us, 2010), Putnam and Campbell argue that feeling thermometers represent an ‘effective way of gauging the gut-level feeling people have towards different groups’ (p. 503). Their analysis of attitudes in the United States using ‘thermometer’ scores found that the most unpopular religious groups were Muslims and Buddhists, along with Mormons (p. 507). The most positive assessments were of Jews, mainline Protestants and Catholics (p. 506).

In the BSA 2008 survey respondents were asked to rate their feelings towards seven groups:
– Protestant people (including Church of England, Church of Scotland, Anglican, Methodist, and others);
– Catholic people;
– Jewish people;
– Muslim people;
– Buddhist people;
– People who are deeply religious; and
– People who are not religious.

The average score for each group is shown in Figure 1 (in ascending order), revealing significant variation in feelings. Muslim people and people who are deeply religious received the lowest mean scores. Catholic people and Protestant people received the highest average scores, followed by people who are not religious. Jewish people and Buddhist people were very close to or the same as the average mean score across groups (56.1). 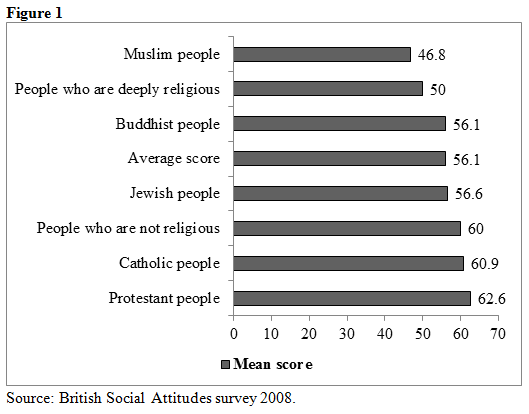