In a world of tick-boxes, write-in responses are always fascinating.  The ‘Any other religion’ line on the census form is an invitation to self-expression that was accepted by hundreds of thousands of people in England and Wales in 2011. They were evidently undeterred by a little-noticed change in the wording on the form, from ‘please write in’ to the unenthusiastic – but more commanding? – ‘write in’.

Commentators are frequently confused by the ‘other religions’ category, because input under this question does not necessarily produce output under the same heading.  There are four kinds of write-in responses:

2)  Descriptions such as ‘atheist’ or ‘agnostic’; these answers are reassigned to ‘no religion’.

3) Facetious answers, the current favourites being ‘Jedi Knights’ and ‘Heavy Metal’; such responses also result in reassignment to ‘no religion’.

4) Names of other groups or belief systems, which are treated as ‘Other religions’ and shown accordingly in the output.

Input to ‘any other religion’, output elsewhere

In 2001 about 292,000 people wrote in the name of a Christian denomination under ‘Any other religion’.  More than 70,000 were Jehovah’s Witnesses, who were making an orchestrated display of distinctiveness.  The Greek Orthodox and eastern Orthodox were also prone to writing in their affiliation.  More surprisingly, Catholics, Anglicans and Methodists collectively contributed nearly 100,000 to the total.  It is hard to know whether these individuals did not see themselves as Christian, wanted to emphasize a denominational identity, or were simply confused by the question, despite the wording next to the tick-box: “Christian (including Church of England, Catholic, Protestant and all other Christian denominations)”.

We do not yet know how many people wrote in denominational labels in 2011; they are an undifferentiated part of the Christian total.  We do have the write-in figures that were reclassified to no religion, however.

The major drop in the number of Jedi Knights has been widely reported in the press.  In some respects the resilience of Jedi humour is impressive, given that the major campaign for ‘recognition’ occurred a decade before the 2011 census.  Heavy Metal has attracted far fewer adherents.

Substantially more people are writing in ‘agnostic’, ‘atheist’ or ‘humanist’ than previously.  In 2001 both ‘humanist’ and the smaller ‘freethinker’ group were treated as categories under ‘other religion’, but they have been moved into ‘no religion’ for 2011.  Conversely the ONS had in 2001 regarded ‘heathen’ as a jocular usage by the irreligious, but outcry from neo-pagans has taken this clan (now nearly 2,000 strong) into religion.

It appears that in 2001 people who ticked the ‘Any other religion’ box without actually writing anything in were reclassified as having no religion. (This interpretation of the output needs to be confirmed with the ONS.)  It is not evident how such cases were treated this time.

There seems to have been a change in the treatment of responses where more than one box had been ticked on the census form (though again the facts will need to be checked).  Rather than counting them under a main heading, there is a new ‘multiple religions’ category under ‘other religions’.

Input and output as ‘other religion’

As shown above, most responses entered as ‘any other religion’ are reclassified to ‘Christian’ or ‘No religion’.  No more than a third actually end up under the ‘other’ output heading.  Categories with counts of at least 1,000 in 2011 are listed below. 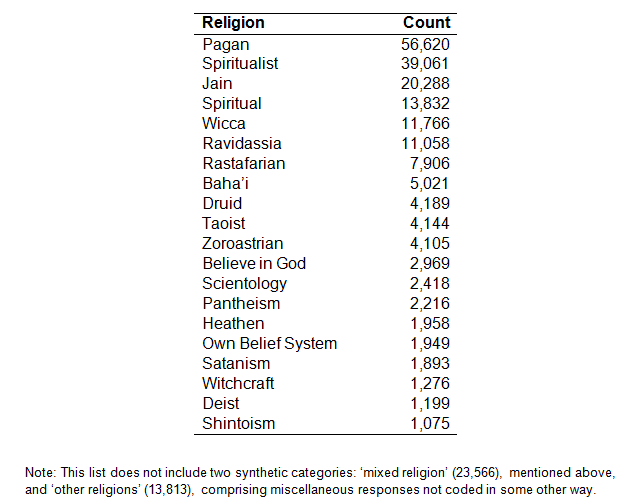 Before moving to comparisons with 2001, a few new entries are worth a mention.  ‘Spiritual’ is near the top of the table and presumably failed to appear in 2001 only because it was not coded; likewise ‘Believe in God’ is likely to be a new code rather than a real innovation.  Shintoism also makes an appearance for the first time.  Ravidassia is a Sikh sect that urged followers to write in the name in order to establish a separate identity for the group.

The table that follows gives the full set of groups included in ‘other religion’ in 2001 or 2011. 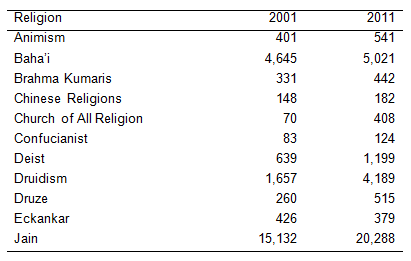 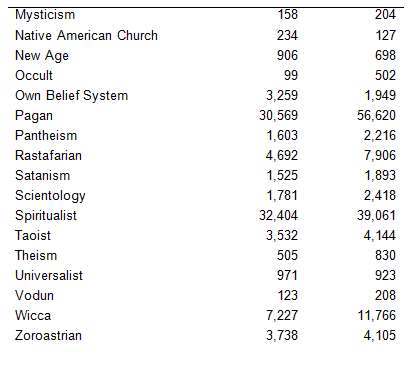 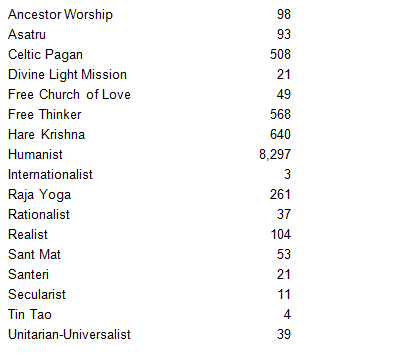 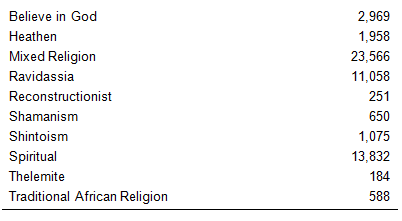 The many groups listed here are a very small part of the religious landscape (encompassing only 0.6% of those who identify with a religion).  They have grown over the past decade, however: aggregating the 28 groups represented in both years, the 2011 total is 44% higher than that for 2001.  Pagans and related groups (especially Druids, but also Wiccans and, as mentioned above, Heathens) have done particularly well.

A few groups were recorded in 2001 but not in 2011.  As already mentioned, Humanists and Free Thinkers are now counted as part of ‘No religion’.  Celtic Pagans are presumably now included in the main Pagan group; Hare Krishnas are likely to have been assigned to the Hindu column (though that needs to be verified).  The Free Church of Love (not to be confused with the Church of Free Love?) is sadly no longer with us, unless it has returned to the Christian fold.

The main new entries for 2011 have already been discussed.  The Unification Church (aka ‘The Moonies’) were previously treated as Christian rather than ‘other’.  ‘Reconstructionist’ is ambiguous, though one suspects that these people should have been counted as Jews.  ‘Witchcraft’ probably appears for the first time only because it was not coded in 2001.

If we adjust the 2001 total for comparability (deducting Humanists, Free Thinkers and Hare Krishnas and adding Heathens and the Unification Church), the ‘other religion’ count has gone up from 141,747 to 240,530.  That represents an increase of 60% at the same time as the population has grown by just 8%.  (If ‘Mixed religion’ is taken out of the 2011 total, the increase is 53%.)  In absolute terms, though, the rise of not quite 100,000 is dwarfed by the fall of more than 4 million in the Christian count.  Other religions still account for less than half of one percent of the population of England and Wales.

Only half a dozen groups received more than 10,000 write-in votes.  Two are ethno-religious (Jain, Ravidassia) and two could be viewed as revivals of old indigenous traditions (Pagan, Wicca).  That leaves Spiritualist and Spiritual, two quite different tendencies with similar names.  The former is relatively organised; the latter is not.

It is striking how little impact the supposed ‘spiritual revolution’ has had on religious self-identification.  The ‘New Age’ category actually declined from the miniscule (906) in 2001 to the even smaller (698) in 2011, though in fairness the term might be seen as pejorative and is falling out of favour among practitioners.  Spirituality seems to be faring little better, though, with fewer than 14,000 people choosing to describe themselves in this way.  Of course the census question on religion is not a particularly good vehicle for expressing an interest in spiritual matters, but then one might have thought the same about Satanism, which falls just short of 2,000.  (The figure is only modestly up on 2001; no Satanic revolution is in the offing either.)

In short, there is growing fragmentation of the religious sphere, but little indication that substantial numbers of people are finding alternative identities they wish to express on the census.  Whether they do so in other ways remains open to debate.

This entry was posted in Uncategorized. Bookmark the permalink.