Posted on September 16, 2010 by Siobhan McAndrew

The debate over the Christian Research data last week, together with coverage of the papal visit, led me to look at church attendance data from the 2005 English Church Census. The English Church Census got a good deal of coverage when results were announced in 2006, when it was announced that 3,166,200 people, or 6.3% of the population attended church. However, I wanted to look again to see which areas of England had higher rates of church attendance, and specifically which areas looked more Catholic.

I’ve given more detail on the English Church Census here, and the full dataset is available at the UK Data Service. The data are available for counties, but David Voas here at BRIN has created a table whereby attendance and church data has been fit to district/unitary authority borders, so that it’s possible to look at attendance at the local authority level.

While the table does not include additional data on other socio-economic characteristics (for which go to Neighbourhood Statistics), it’s interesting to see which areas of the country have higher church attendance and which much less, as illustrated by the map below (click on the image to enlarge). This can also be compared with the religious affiliation data from the 2001 Census, illustrated by these maps. 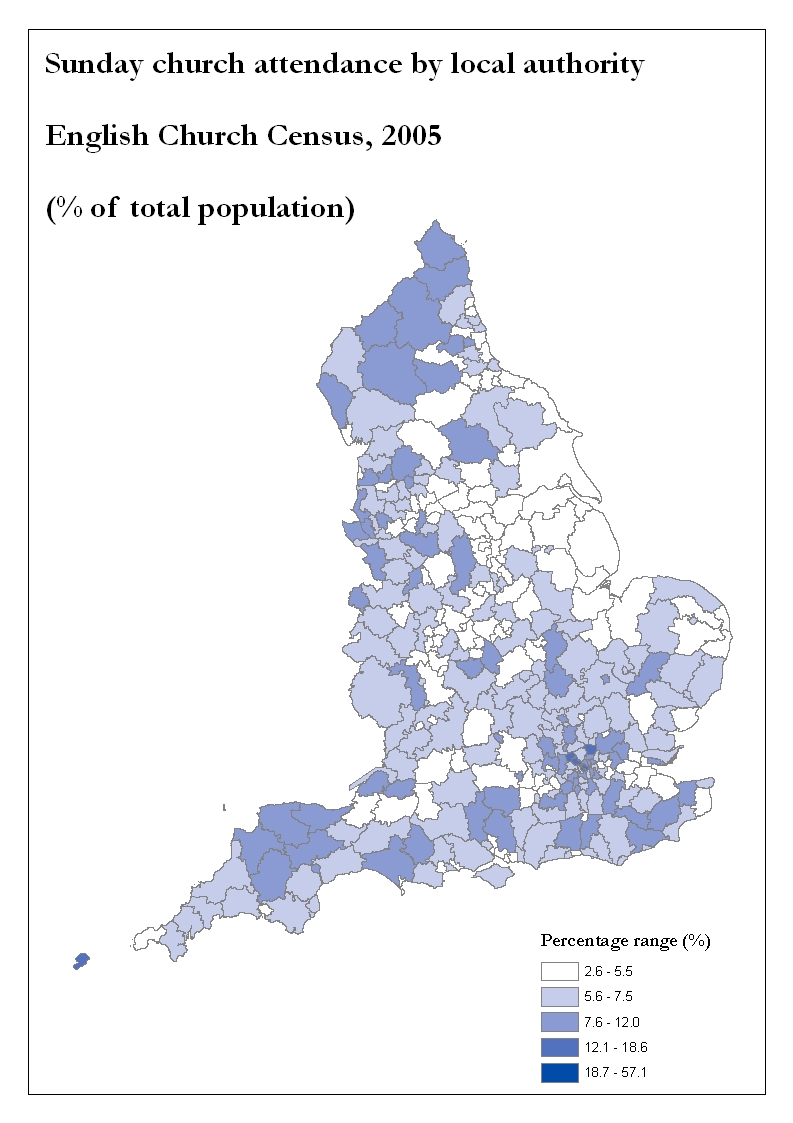 First, the area with the lowest percentage of people going to church is North East Lincolnshire, at 2.6%. This looks extremely low, but given that the national average attendance is 6.3%, is scarcely an outlier.

Secondly, the area with the highest percentage of people going to church appears to be the City of London, at 57%. This raises alarm bells, because the City of London also reported a very high percentage of people with no religious affiliation in the 2001 Census: 24.6%, which was the fifth highest rate among English local authorities. But of course the City of London is not really comparable with other local authorities; it hosts a much smaller number of people (7,185 in 2001), and only one (Anglican) primary school. However, it hosts 40 churches (as counted by the English Church Census), many of them historic, and they undoubtedly draw worshippers from across London. This link provides some further information.

Similarly, the City of London is also the local authority which reports the highest proportion of attenders of New Churches, at an apparent 4.01% of the local population. (New Churches reject denominational labels or principles, with examples being those within the Vineyard or Newfrontiers franchises.) Because of the small overall population his is down to a single church, which drew in 288 attenders on Church Census day.

The histogram helps illustrate just how problematic the City of London figure is – any statistical analysis of this data would surely have to drop the observation. 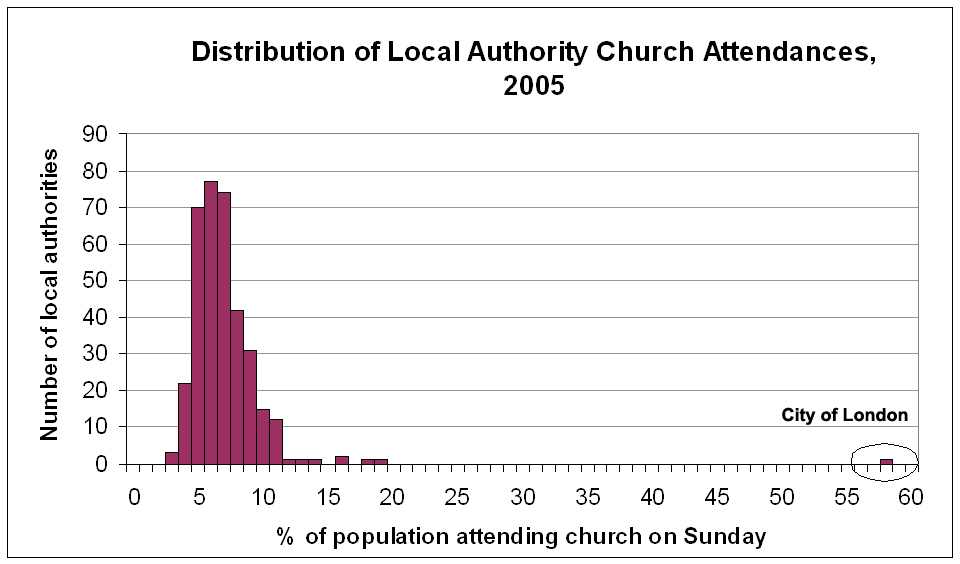 The next highest is the Scilly Isles (18.6% attending church on Sunday), a location which might also be considered atypical. The third highest is Kensington and Chelsea at 17.2%. This may partly be due to the nature of the Royal Borough’s population (there is often though to be a relationship between class and church attendance) and also because the Brompton Oratory and Holy Trinity Brompton are likely to draw in attenders from other boroughs. The next is Westminster (15.7%) which hosts Westminster Abbey and Westminster Cathedral; nevertheless the majority of local authorities with relatively high rates of church attendance appear to be in Greater London or the London commuter belt. The remainder of those with over 10% church attendance are Brent, Enfield, Harrow, Ribble Valley, Lewisham, Wirral, Brentwood, West Devon, Wandsworth, Southwark, Sevenoaks, Guildford, South Bucks, Camden, Cambridge and Kingston-upon-Thames.

The ‘bottom ten’ range from 3.6% in South Holland in Lincolnshire, followed by Kirklees, Wychavon (Worcs.), Telford and Wrekin, Doncaster, Fenland, Ashfield (Notts.), Bolsover (Derbyshire), Rotherham (S. Yorks), and North East Lincolnshire, which pulls up the rear at 2.6%. I don’t know enough about these areas to suggest why; some may host high proportions of non-Christians, others populations which are distinct in other ways, or have dispersed rural populations which are ‘underserved’. This awaits further analysis.

So which areas are most Catholic? This map shows Catholic church attendance as a percentage of population. 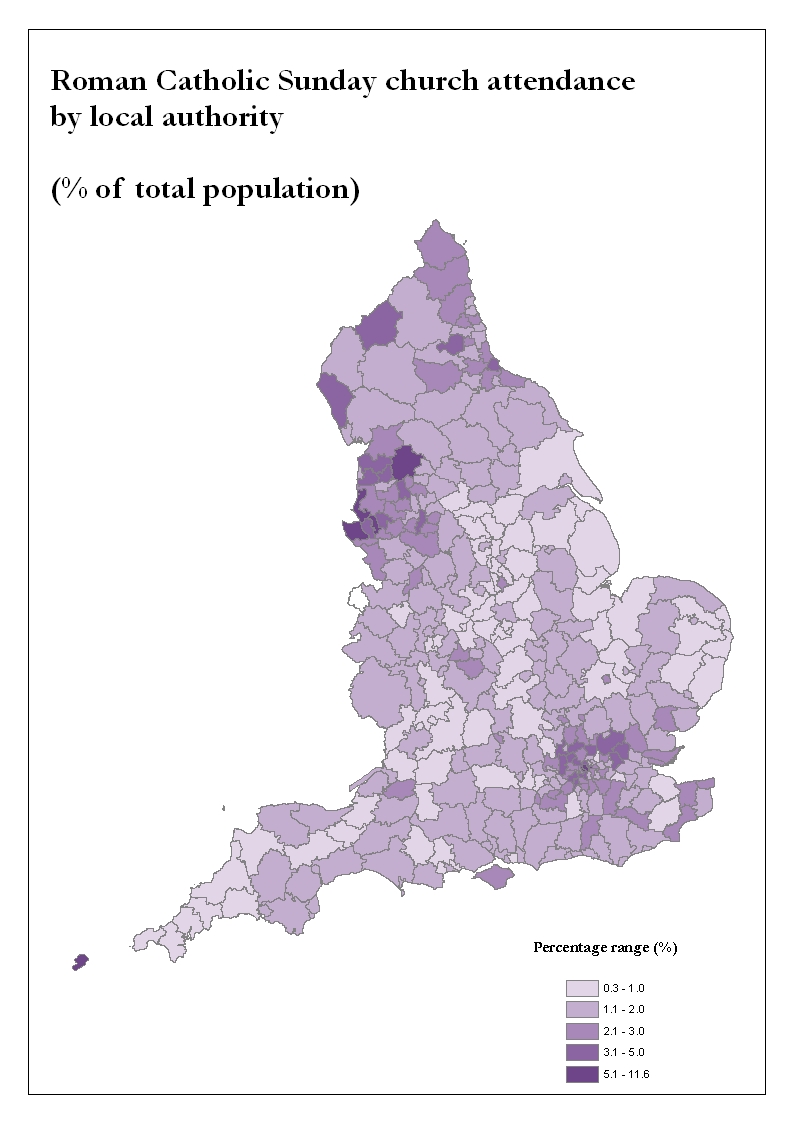 The highest rates of attendance appear to be in the North West, North East and London. The top three local authorities are the City of London (11.6%), Westminster (7.0%), and Kensington and Chelsea (6.5%), which for the reasons outlined above might reasonably have less to do with the local authority’s population and more to do with their places of worship. The next is then Ribble Valley (5.8%), Wirral, Scilly, Sefton (Merseyside), Knowsley (Merseyside), and Liverpool (5.0%). Some of this is surely due to the legacy of Irish immigration. Ribble Valley also hosts Stonyhurst College, a large Catholic boarding school, which may have boosted its total. Of the top 50, all fall within the North West, North East, Greater London and the South East. The bottom 50 appear to be mostly located in Lincolnshire, Shropshire, Gloucestershire, and Nottinghamshire – which are more rural counties outside the south east.

Of the areas where there are high rates of Pentecostal church attendances, nineteen of the top twenty are in Greater London, and the twentieth is in Luton. 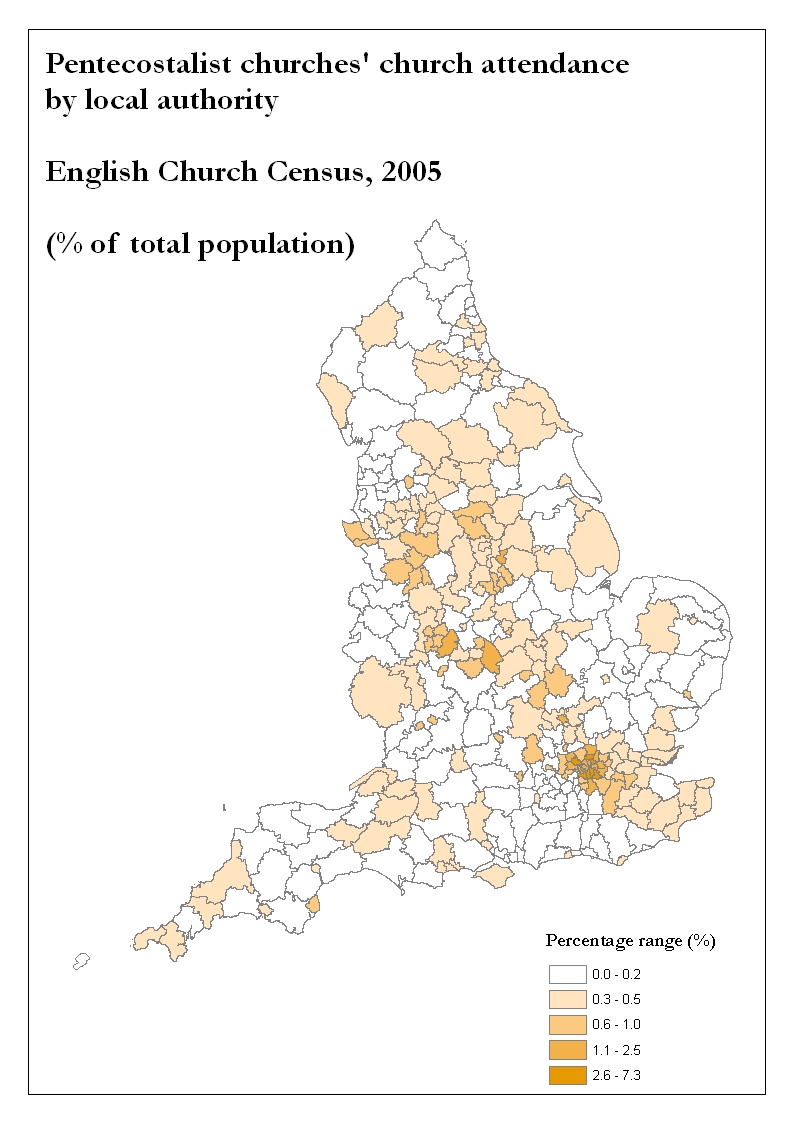 In Brent, 7.3% of the population appear to attend Pentecostal churches on Sunday, although it may be that as with the Anglican and Catholic cathedrals in Westminster there are particularly large churches there drawing in attenders from elsewhere. At 5.6% the rate for the City of London again looks unreliable; the next ranked is Southwark at 4.7%. In 39 local authorities there are no Pentecostalist attenders represented at all – and these are predominantly local authorities in the leafy shires. The map illustrates that attendances are mostly in urban centres.

This is clearly a very basic outline of the geography of attendance. To understand what is driving such variation in attendances, we would need to look at the characteristics of the population, as well as of the nature of the churches operating in each area. Nevertheless, the spatial pattern is intriguing and suggests a strong link to immigration history, and rural/urban differences.

There is much to be gleaned from this Census on its own: readers should look at Peter Brierley’s Pulling Out of the Nosedive (2006), and the UK Christian Handbook Religious Trends 6 for further data and analysis. Given the debate last week about whether attendances have been falling or holding up over the decade, Christian Research’s plans to conduct another within the next year or so are of great interest.

4 Responses to Church Attendance in England, 2005