The BSA has asked a question on (current) religious affiliation in every survey conducted since 1983. The figures from the 2014 survey are similar to those obtained in recent years. Around half said they had no affiliation (49%), while those with an affiliation divided into Anglicans (18%), Catholics (8%), other Christian (17%: consisting of 5% with a specific affiliation and 12% with no denominational affiliation), and those belonging to some other religion (8%).

Not shown on the chart but also an important aspect of change in religious belonging is the shift within the other Christian category: those who identify as such but without any specific denominational tradition have become a greater share of this group over time, with a decreasing proportion professing a clear denominational association – in particular, with the Nonconformist churches. The proportion identifying as Christian with no specific denominational allegiance was just 3% in 1983 while those with a denominational allegiance comprised 14%. The proportion in the other Christian category has remained static over time, but there has been considerable change within. Whereas in 1983 self-identification as Anglican was more than twice the level found for other Christian (excluding Catholics), in 2014 the levels are almost identical. 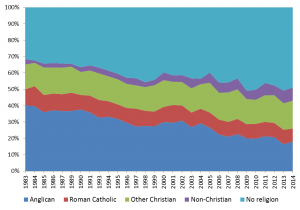 The BSA surveys have since 1991 asked about the religion (if any) that a respondent was brought up in. In 2014, 30% of respondents said they had been raised as Church of England/Anglican, 15% as Roman Catholic, 27% were raised in some other Christian tradition, with 9% brought up in some other religious faith. Nearly a fifth said they were not raised within a religious faith (19%). Back in 1991, when the question was first asked, the proportions were somewhat different. Well over half (57%) reported being raised as Church of England/Anglican, 14% as Roman Catholic, over a fifth within some other Christian tradition (22%), and 3% within a non-Christian faith. Just 6% said they were not brought up within a religious faith – a figure which has therefore tripled over recent decades. The proportion saying they were raised as Anglican / Church of England has therefore nearly halved over this period.

The BSA surveys have also asked questions on religious behaviour, including on a regular basis about religious attendance and – in 2004 and 2014 – about membership of religious organisations and churches. Data on attendance and membership broken down by affiliation are shown, respectively, in Tables 1 and 2. Church attendance is divided into three categories: frequently (once a month or more often); infrequently (less often than once a month); never attends.

Table 1 shows that, across the categories, regular attendance is least common amongst Anglicans (18%) and much more common amongst Catholics (40%), other Christians (34%), and particularly those belonging to other religions (62%). Data from the 1983 survey show that, similarly, Anglicans were least likely to report being regular-attenders (18%), compared to other Christians (47%) and Catholics (55%). Infrequent attendance is most prevalent amongst Anglicans and they are also most likely to say they never attend services (beyond special occasions). Those belonging to other religions are least likely to report that they never attend services – less than a fifth. Splitting the other Christian category into those with and without a specific denominational affiliation, the latter group have reported higher levels of regular attendance. In 1983, 52% of those with a denomination affiliation said they attended frequently compared to 22% of those with no denomination. Three decades later, this difference is still evident: 48% of those with a denominational affiliation say they attend church regularly compared to 29% of those with no denominational allegiance.

Question wording: ‘Apart from such special occasions as weddings, funerals and baptisms, how often nowadays do you attend services or meetings connected with your religion?’

Overall, the proportions belonging (actively or otherwise) to a religious organisation or church fell somewhat over the decades, from 35% to 26%. Those who used to belong comprised 24% and 25% in, respectively, 2004 and 2014. The proportion saying they had never belonged to such a group rose from just over two-fifths to nearly half.

Table 2 reports data based on affiliation from the 2014 survey. Anglicans are least likely to say that they are active within a group (29%), with active participation most evident amongst Catholics (32%). Catholics are also most likely to say that they are inactive members of a group. Overall, around two-thirds of Catholics belong to a group, compared to two-fifths of Anglicans, and around half of other Christians and those from some other religion. Anglicans and those from other religions are most likely to say they have never belonged to a church or religious organisation. Dividing the other Christian category into those with and without a denominational affiliation again shows a clear difference in levels of involvement. Of those with some form of denominational affiliation, around two-third either actively or passively belong to a church or religious organisation, considerably higher than the two-fifths of non-denominational Christians who say they do so.

Table 2: Belongs to a religious organisation or church, by religious affiliation

The BSA surveys also ask a range of question probing social and political attitudes, which can be examined on the basis of religious belonging or behaviour. Two such examples are used here: same-sex equality and tolerance for religious extremists.

In overall terms, opinion in favour of marriage equality for same-sex couples has increased markedly over time: from 13% in 1989 to 49% in 2007, and settling at around three-fifths in more recent surveys. Table 3 reports the proportions agreeing that gays and lesbians should have the right to marry, based on religious affiliation. The proportions agreeing with the statement have risen considerably over time. Even so, on each occasion, those with no affiliation are most likely to agree with same-sex marriage (increasing from 20% in 1989 to 74% in 2014). While very small proportions of Anglicans, Catholics and other Christians agreed in in 1989, about a half did so in 2014. The proportions in agreement amongst those from non-Christian religions are clearly lower (33% in 2014), although it should be noted that they obviously represent small proportions of the BSA survey samples.

Table 3: Percent agreeing that gays and lesbians should have the right to marry, by religious affiliation

1989: ‘Do you agree or disagree that … Homosexual couples should have the right to marry one another.’

2007-2014: ‘How much do you agree or disagree that … gay or lesbian couples should have the right to marry one another if they want to.’

Finally, Table 4 reports attitudes towards a question asking about religious extremists being allowed to hold public meetings asked in the 2004 and 2014 surveys. In overall terms, attitudes on this question have hardened over time: in 2014, the proportion thinking religious extremists should (definitely or probably) be allowed to hold public meetings is 23%, lower than the 33% expressing the same view in 2004. The same is also the case for each group based on religious affiliation. In general, around a fifth to a quarter think they should be allowed in 2014, with large majorities against – highest at 78% of Anglicans. In 2004, the proportions in favour were in the range of 29-40%, with smaller – but still clear – majorities opposed (with the exception of other Christians, at 49%).

Question wording: ‘There are a number of groups in society. Should religious extremists be allowed to hold public meetings?’.

BRIN readers might be interested in earlier posts which used BSA survey data to look in more detail at affiliation and attendance – both levels of change overall and variation across social groups: