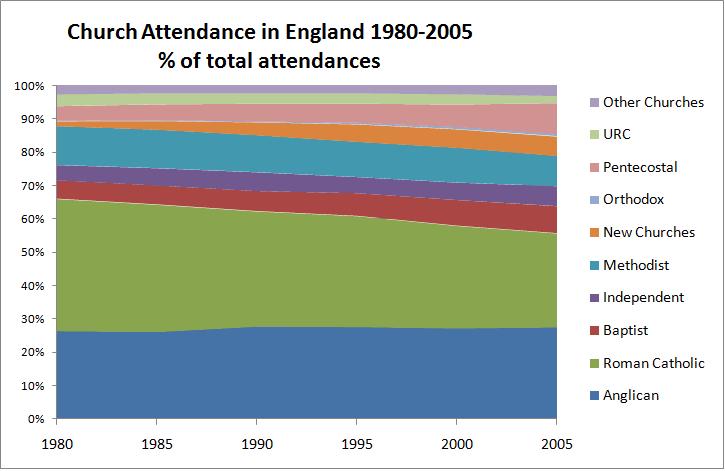 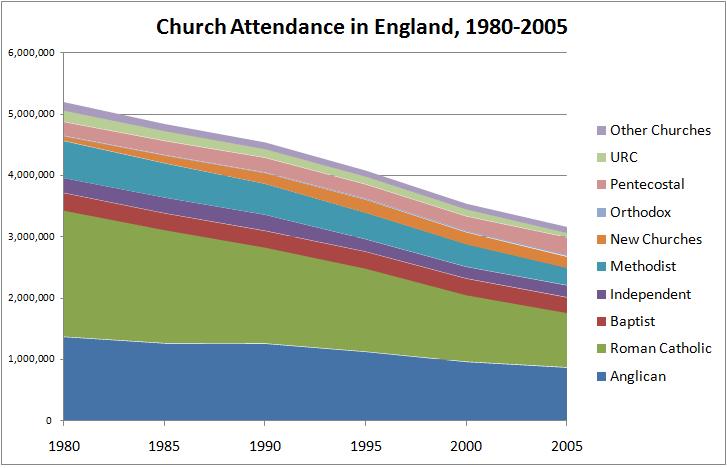 The seven editions of Religious Trends edited by Peter Brierley were crucial contemporary compendia both for those running religious organisations and researchers interested in religious statistics, particularly denominational statistics.

The core of each edition is the summary estimates of church membership, church numbers and ministry for significant Christian denominations. These are both individually and within broad faith tradition: Anglican, Catholic, Nonconformist and so on. Brierley also provided short- and medium-term projections of future numbers, using damped linear projections (for example, for the 2010 and 2015 attendance estimates given below).

The diversity and breadth of coverage which each edition offered, however, required selectivity so that data series are not often strictly comparable between editions. One edition might provide data for Britain as a whole, and the next breakdowns by home country; one would provide data for certain years and the next might drop some observations in order to include years previously omitted.

Of perennial interest are data on trends in church attendance and so here we have compiled tables from data reported in Religious Trends 3 and Religious Trends 7 reporting estimates for 1980-2015.

Census data are helpful because attendance data based on counts can be more valuable than self-reports of attendance via survey data. People often exaggerate or otherwise misremember their actual attendance. This thought to be less because respondents wish to appear more religious to impress the survey interviewer (social desirability bias), and more due to their attempt to illustrate that they have a connection with churches and that this is an important part of their identity, even though they did not attend in the past week or month. The American researchers Kirk Hadaway and Penny Marler have suggested that the ‘church attendance’ question forces respondents to choose an identity. Why people choose a more religious identity than their behaviour suggests is an open question.

For more on these data and issues, see:

Peter Brierley, Pulling Out of the Nosedive. A Contemporary Picture of Churchgoing: What the 2005 English Church Census Reveals (Christian Research, 2006)