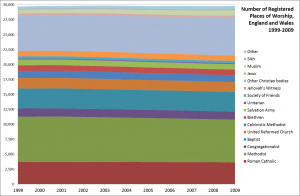 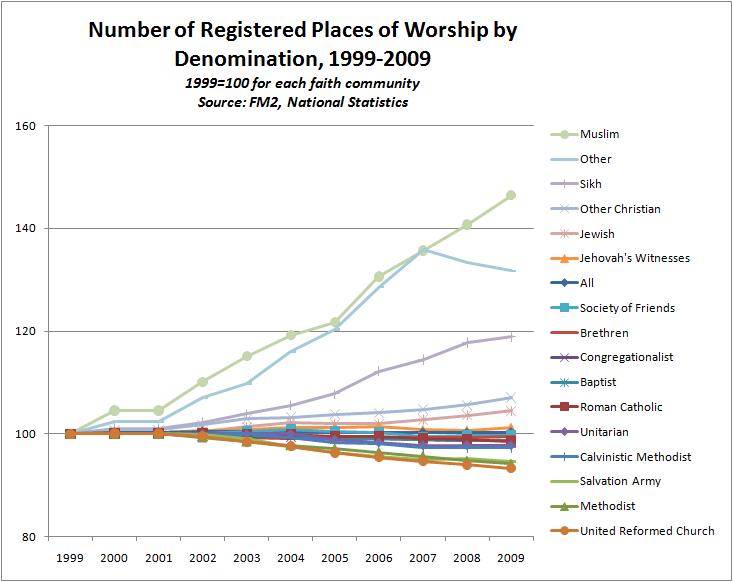 Official statistics on registered places of worship in England and Wales, 1999-2009.

Counting the total number of church buildings and places of worship over time is not straightforward. Under the Places of Worship Registration Act 1855, legal provision was made for non-Anglican or Church in Wales places of worship to register officially with the General Register Office, which allowed marriages to be conducted on the premises. The Local Government Finance Act 1988 also provided for places of worship to be exempted from local business rates, an added incentive to register.

Note these data cannott be used on their own as an indicator of community growth and decline, for a number of reasons:

History of Registration
The registration of places of worship has an interesting history, covered in detail by Clive Field elsewhere on this site (see page 3 of this report).

In 1689, nonconformists were required to register their meeting houses with the authorities in England and Wales – an obligation which never extended to Scotland. The process also conferred legal (and later, taxation) advantages, so organisations preferred to register even when the obligation to do so lessened after the Places of Worship Registration Act 1855.

Before the mid-nineteenth century licences were issued by county and borough quarter sessions, or episcopal and archidiaconal registries, but the Protestant Dissenters Act 1852 transferred the responsibility to the Registrar General – and the General Register Office still holds this responsibility.

Lists and tables of these registrations have been published occasionally as House of Commons Parliamentary Papers before the First World War (for instance, 1882,Vol. 50); or later (intermittently) in The Official List, Part III and Marriage and Divorce Statistics, in a series published until 2008 by National Statistics as FM2 Table 3.42. Buildings registered for the solemnisation of marriages are identified separately as FM2 Table 3.43. Data for selected years from 1972 have been assembled in the various editions of P. Weller (ed.), Religions in the UK.

Why and How Places Register
Places of worship which have been registered officially are generally exempted from local business rates. Schedule 5 of the Local Government Finance Act 1988 provides that the places of worship are exempted if they are Church of England or Church in Wales, or ‘any other recognised religion… and the premises must be used and available for public religious worship’. Church halls and administrative offices also qualify if required for the place of worship to operate. While being officially-registered does not prove that a building is a place of worship, registration is an additional piece of evidence that the property is actively used as a place of worship. It nevertheless is plausible that non-registered places of worship are also awarded exemptions as a matter of course.

Religious organisations are asked to fill in Form 76, provide a plan or sketch of the building identifying the spaces used for worship, and a timetable of when the building will be used. These are sent to the Superintendant General. The form provides that the faith group name is given in the space after the following: ‘XXXX will accordingly be forthwith used as a place of meeting for religious worship by a congregation or assembly of persons calling themselves XXXX’. Hence it is very simple and non-prescriptive with regard to identifying names.

A Freedom of Information Request made in March 2010 led to a complete list of the extant Register being published online, illustrating the issues at hand. For example, on that list there is one place of worship listed as “Quaker”, 41 as “Quakers”, 314 as “Friends”, and 9 as “Society of Friends”. Most mosques are described as attended by “Muslims” but in some cases “Sunni Muslims” or “Shia” are specified. There are a number of mis-spellings; it is not clear when places of worship were added to the database; and addresses are not entered consistently (many specify the part of the building which is used as a place of worship – e.g. “two rooms on second floor” rather than the postal address).

The form does advise that ‘the description “Christians not otherwise designated” may be used. If the worshippers decline to describe themselves by any distinctive appellation, the words “calling themselves” may be erased and the words “who object to be designated by any distinctive religious appellation” inserted’. Accordingly, of the 29372 listed in March 2010, 1517 identify as “Christians not otherwise designated” and 53 churches “who object…”. Offering a list of standardised terms would help categorise the raw data and draw further information on the nature of the congregation.

Under- and Over-Registration
What is clear is that not all places of worship register – and equally, places of worship which are sold to residential property developers are not required to be de-registered. Checks of the March 2010 Register threw up examples of churches which were for sale, and a number of organisations which appear no longer to operate. Mehmood Naqshbandi at the excellent Muslims in Britain site and online directory has been running a project for several years to identify every active mosque (masjid) in England and Wales, and has reached a count of 1834 mosques – some way above the officially-registered total.

He suggests that perhaps as many as 20% of the entries for mosques in the official Register are for mosques which no longer exist, while the running total does not capture about half of the actual Muslim places of worship. In some cases, this may be because they are prayer rooms within universities or similar, or exist as facilities within larger community and cultural centres, and therefore there is no financial benefit in registering.

‘There is negligible benefit in registering, it being ‘permissive’ since 1852. The process dates to a time when religious dissenters were excluded from many aspects of civil life. Furthermore, the Register is massively out of date, largely from neglecting to de-register congregations’ places of worship that have moved or disbanded. The state-established churches of Britain, e.g. Church of England churches, are exempt from registration, so would add considerably to the 40,000 listed’.

He is currently working through his own records and the Register to categorise mosques in Britain in as much detail as possible: by administrative boundary, religious tradition, size, location and so forth. The project also aims to uncover where under- or over-registration is most prevalent. The most recent summary of his data is available here.

Estimates for 1801-1971 calculated by Robert Currie, Alan Gilbert and Lee Horsley are available on BRIN at: http://www.brin.ac.uk/figures/churches-and-churchgoers/church-buildings-1801-1971/

A copy of the Register as of April 2016 is available via the GRO and GOV.UK at https://www.gov.uk/government/publications/places-of-worship-registered-for-marriage

Pending our own updating of the 1999-2009 series, BRIN users could use this by searching on the denomination listed to calculate their own estimates of the number of places of worship for each faith community in 2016.