This post presents some data from the BES 2015 face-to-face post-election survey (a cross-sectional study with a sample size of 2,987), the fieldwork for which was undertaken between May-September 2015. The dataset and accompanying documentation can be obtained here. This post looks at voting behaviour at the 2015 general election on the basis of religious affiliation and attendance.

Table 1 shows the overall profile for religious affiliation. Around a fifth (21%) of respondents identified themselves as Anglican / Church of England, 9% identified as Catholic, 6% as belonging to some other Christian denomination, 13% as Christian with no denominational affiliation, 8% as belonging to some other religion, and just over two-fifths (43%) said they did not have a religion.

Table 2 shows the distribution of party vote share at the general election across religious groups. A clear majority of Anglicans said they voted Conservative (59%), compared to 19% of whom supported Labour, while a plurality of Catholics voted Labour (40% compared to 35% who supported the Conservatives). A plurality of other Christians with or without a denominational affiliation also reported voting Conservative. Amongst those identifying with non-Christian faiths, a large majority said they voted for Labour (65%) compared to around a quarter who supported the Conservatives (23%). There was an almost even split amongst those with no religious affiliation, 33% and 34% of whom, respectively, supported the Conservative and Labour parties. Voting for UKIP was lowest amongst those belonging to non-Christian faiths, and highest at over a tenth of Anglicans, other Christians without a denomination, and those with no affiliation.

Table 2: Party voted for at 2015 general election, by religious affiliation

Note: Percentages sum across the rows.

Table 3: Party voted for at 2015 general election, by religious attendance

Figure 1 shows the party vote share for attendance amongst Anglicans and Catholics. That is, each of these religious denominations has been subdivided into two groups: (i) frequent attenders and (ii) infrequent attenders or non attenders. Amongst Anglicans, there was broadly similar support for the Conservatives amongst those who attend frequently and those who attend infrequently or not at all. Labour support was somewhat higher amongst those Anglicans who regularly attend church. Amongst Catholics, those who go to church services on a regular basis were more likely to say they voted Labour compared to their co-religionists who attend less often or not at all. There was less variation in support for the Conservatives at the 2015 election based on levels of attendance amongst Catholics.

Figure 1: Vote share for the Conservative and Labour parties at 2015 general election, attendance by affiliation 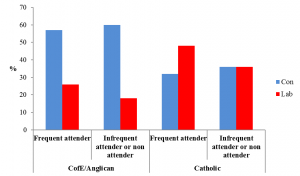 Previous BRIN posts have used BES studies to look at the association between religious factors and party choice at the 2015 general election: