Religiosity and Secularity in the 1957 Youth Research Council Survey

The Youth Research Council survey, recently published by the UK Data Service, was motivated by the desire of the Young Christian Workers and the Newman Demographic Survey to investigate religiosity and religious practice among young people during their formative years. To reiterate, the sample comprised young people aged 15-24 living in urban England in 1957. Some headline data are given on religious belief and practice in Table 1 below: belief in God was the norm, but there is evidence that strict adherence to the requirement to attend, and more challenging beliefs such as belief in hell, were in retreat. 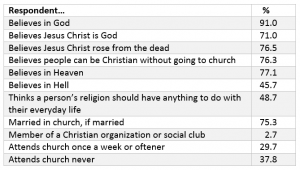 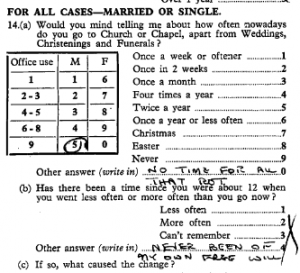 No time for all that rot. Never been [to church] of my own free will.

The Young Christian Workers members and volunteers fielding the survey were instructed to write down as much as possible of what the respondents said in response to questions. This example shows a response from a believer.

The response ‘it’s my husband that is athiest [sic]. Not me’ suggests a slight issue with the recording of responses, with this woman apparently giving her husband’s views rather than her own.

In some cases we get a sense that respondents were surprised to be asked questions of this nature. In the example below, to the question ‘do you think a person’s religion should have anything to do with his everyday life?’ the respondent replied ‘[it’s] difficult to answer in [a] few moments’. In the following example, the respondent said ‘you’d better put ‘yes’’ to the question on belief in God, and added ‘[I] didn’t expect these questions’ to that on the divinity of Jesus Christ. 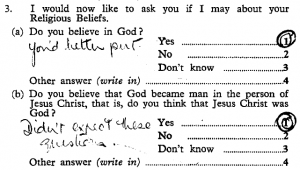 One respondent clarified that they had no religion but were ‘PROTESTANT – not a Catholic’. Most likely, the respondent was just not religious, but aware that their ethnic or nominal religion was Protestant rather than Catholic, even if they could not be more precise as to whether they were Anglican or nonconformist. Similarly, a second respondent identified themselves as Anglican, and clarified further that they were ‘not Catholic!’ And quite a few seemed not to know what they were in terms of religion. 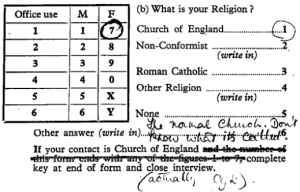 Q: ‘What is your Religion?’ A: ‘The normal Church. Don’t know what it’s called’.

The interviewer annotated ‘actually C of E’ below their response.

One respondent replied stolidly that their religion was ‘Church’. The coder subsequently identified them as Church of England.

Indeed, there is plenty of evidence of what David Voas terms ‘fuzzy fidelity’: 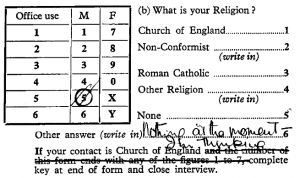 ‘Nothing at the moment – I’m thinking’.

This respondent saw themselves as the norm: a young female Anglican, she clarified that her religion was ‘just ordinary!’

This respondent was apparently a pantheist, or perhaps simply highly credulous. 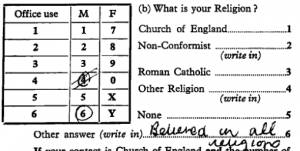 Some responses to the question on religious identity will be familiar to sociologists of religion who have discussed Sheilaism. This respondent identified her religion as ‘trying to be a good girl’ about a quarter of a century before Robert Bellah and Richard Madsen described the faith position of young American Sheila Larson in Habits of the Heart.

This respondent shows some evidence of switching and ‘shopping around’: to the question, ‘what is your religion?’ he replied ‘Christened in Church of England but I prefer Methodist[s]’.

These were more communitarian times, however, and ‘shopping around’ was difficult for some, as with the respondent below. 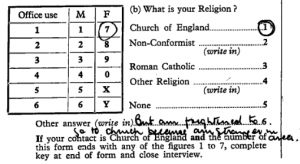 ‘[I am Church of England] but am frightened to go to Church because am stranger in [the] area’.

The following respondent held forthright views on the community aspect rather than loss of belief as being the reason for going to church less than when they were younger. 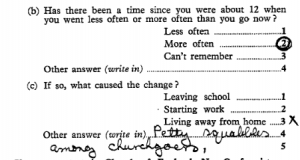 This respondent replied clearly that they ‘[had] no religious beliefs’.

There is also the beginning of a sense of authenticity relating to personal religiosity – that participation was not enough. 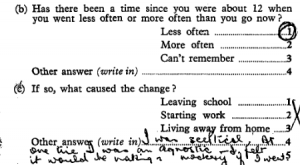 ‘[I attended less than now because] I was sceptical. At one time I was an agnostic – I felt it would be making a mockery if I went’.

We also see some stirrings of anti-authority feeling and independence of mind: 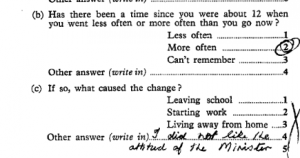 ‘I did not like the attitude of the Minister’.

‘[I] didn’t like the way they were teaching at Sunday School – they drummed it into you’.

But then there were other individual, even individualist, answers. On the religious affiliation question, one respondent concluded that he ‘had better say Hedonism’. Another replied ‘Me’. 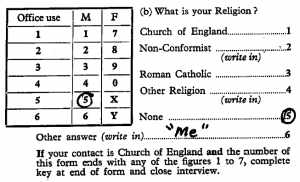 There was also evidence of reflection, and of highly considered answers. We’ll close with two striking examples.

‘You must be extraordinary to do without fellowship’.

‘I believe it is a good thing to have a religion, but so far have failed to find any religion which I consider perfect’.