Religious Census 2011 – What happened to the Christians? (Part II)

As discussed in December 2012 on BRIN, the sharp fall in the ‘Christian’ population has been the big story on religion from the 2011 census.  If the 2001 results posed one problem for religious statisticians – why was the Christian figure so high? – the latest findings are just as puzzling: why has it fallen so fast?  The more detailed tables just released provide partial answers.

One new table provides the breakdown of declared religious affiliation by age and sex.  For present purposes we exclude minority religious groups (though of course their size and distribution of is an important topic to which BRIN will return).  Omitting Muslims, Hindus, Sikhs, Jews, Buddhists and others leaves us with people who ticked Christian, no religion, or did not answer the question.  We can then calculate the Christian fraction of those subtotals by age.  The results are shown in the graph below.

Christians as a percentage of the population, minority religious groups omitted (England and Wales, 2001 and 2011 censuses) 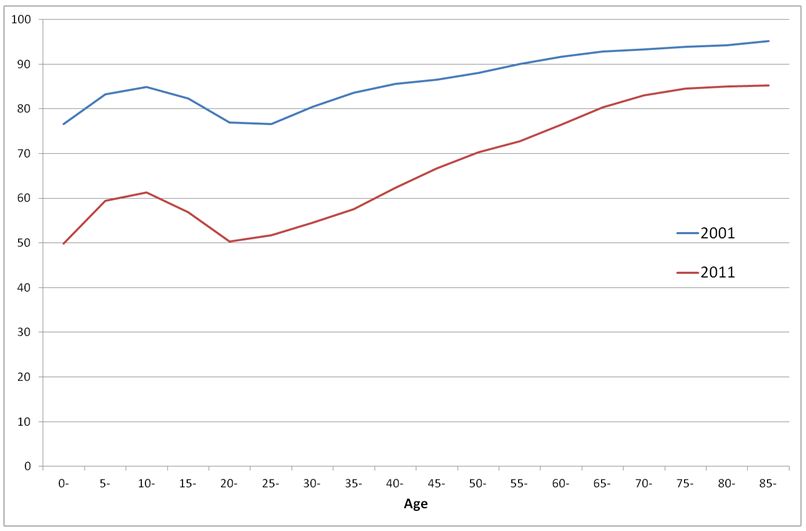 The first point to note is that the pattern by age is very similar in the two years.  Parents answer the census questions for their children, and unsurprisingly children around age 10 are described as Christian with about the same frequency as their parents (approximately age 40).  Many people are not inclined to ascribe a religious affiliation to infants or very young children, and conversely adolescents aged 15-19 are starting to demonstrate their independence: these two factors produce the characteristic hump in the reported affiliation of children.  Thereafter one finds the typical generational profile of religious belonging, and affiliation rises steadily from young adults to the elderly.

Although the shapes of the graphs are much the same in 2001 and 2011, the levels are remarkably different.  Excluding minorities, more than three quarters of people aged 20-24 were labelled Christian in 2001; in 2011 the proportion in that age group was only one half.  The gap narrows as age rises, however. 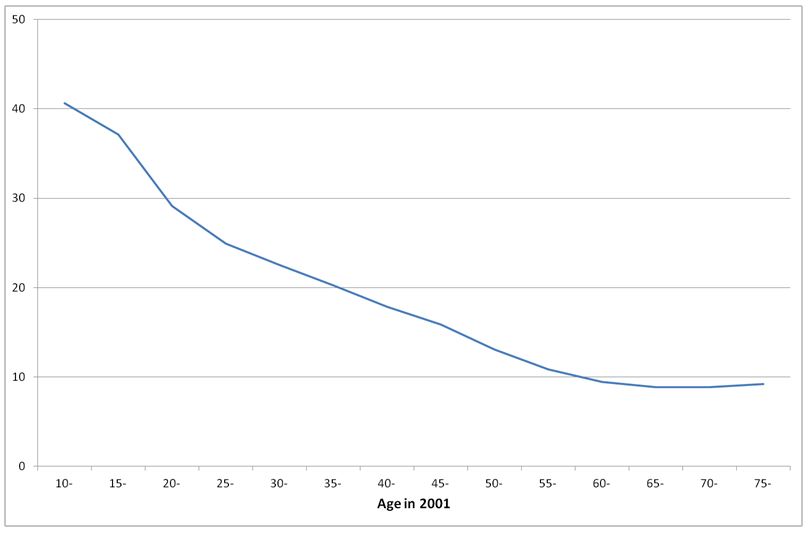 The first two cohorts consist of children who for the most part would have been ascribed a religious affiliation by their parents in 2001; the very high level of apparent defection is no great surprise.  The change among young adults is very striking, however.  Of people in their 20s and early 30s in 2001 who called themselves Christian, a quarter no longer did so in 2011.

The effect of immigration

These figures are all the more remarkable because they underestimate the amount of drift away from Christian self-identification among people born in the UK (or present in the country in 2001).  The population in 2011 includes immigrants who would not have been counted in 2001.  The non-Christians have been excluded, as explained above, but many immigrants are Christian and relatively few describe themselves as having no religion.

Immigrants are disproportionately young adults.  Of people aged 25-34 in 2011, fully one quarter were born outside the UK.  All of those individuals who did not self-identify with a minority religion are included in the figures used above.  Some would also have been present in 2001, and some will be counted as having no religion or religion not stated, but a high proportion will be Christian.  The defection from Christian affiliation between 2001 and 2011 is therefore underestimated in the graphs above, particularly among young adults, because it is offset by an infusion of Christian immigrants.

One caveat should be added for the sake of completeness.  This analysis assumes that the numbers of people describing themselves as having no religion, or not answering the question, have not been substantially inflated between 2001 and 2011 by people of non-Christian heritage.  Further checks can be done in due course, but for the moment these results seem reliable.

The overall position, as a reminder, is that the population of England and Wales increased by 4.0 million between 2001 and 2011, but the number of Christians (according to the census) fell by 4.1 million.  We know from mortality statistics that 5.1 people died during the decade, of whom not quite 4.3 million are likely to have been Christian.  They have been replaced in the population by 2.8 million Christians under the age of 10 in the latest census, for a net loss of 1.5 million.  This loss is largely offset by the arrival of 1.3 million Christians from elsewhere.  Cohort replacement and immigration combined, therefore, only account for a drop of 0.2 million in the Christian total.  The implication is that 3.9 million people who were described as Christian in 2001 do not appear as such in 2011.  (This value is the net change: if some people moved into the Christian category in 2011, the actual number going the other way would be correspondingly larger.)

Defection is strongly age-related; the younger the respondents, the more likely they are to have moved away from self-identification as Christian.  The result is that the generation gap in religious affiliation in the census now looks more similar to that found in other national surveys than was previously the case.  In the British Social Attitudes survey, for example, about 80% of elderly respondents but only 35% of young respondents (excluding ethnic minorities) regard themselves as belonging to a religion.  As shown above, the
corresponding values for Christian affiliation from the 2011 census are 85% and 50%.  The gap is still only 35 rather than 45 percentage points, but it is not as dramatically at odds with other sources as the 18-point gap was in 2001.

Why so many individuals – especially young adults – described themselves one way in 2001 and another way ten years later remains an open question.  Perhaps levels of anxiety about national and cultural identity eased, so that reactive self-identification as ‘Christian’ became less frequent.  Or perhaps people decided that not being the ‘other’ (Muslim, Hindu, and so on) could just as easily be asserted while having no religion.  The generally positive connotations of being Christian might have been eroded over the decade.  We shall continue to report on the characteristics of the defectors as more data become available.

4 Responses to Religious Census 2011 – What happened to the Christians? (Part II)