Religious Change in Britain: Evidence from the 1991 and 2018 ISSP Religion Modules

This post analyses data from the religion modules which have featured in periodic British Social Attitudes (BSA) surveys as part of the cross-national International Social Survey Programme (ISSP). The ISSP’s religion modules have been included in the 1991, 1998, 2008 and 2018 BSA surveys. The BSA survey datasets were obtained from the United Kingdom Data Service.

Table 1 reports selected findings from the ISSP modules, based on comparing the 1991 and 2018 surveys. The questions gauge different aspects of religion in wider society: religious authority, belief in God, other religious beliefs, and religious activity. It reports the question wording, response option and the relevant percentage. Data from the regular, long-running BSA questions on religious affiliation, upbringing and attendance are also shown for the surveys. Overall, some indicators show clear change over time and others display relative stability.

The core BSA religion indicators show that the proportion with a religious affiliation has declined from 65% in 1991 to 48% in 2018. The proportion brought up in some religious tradition has also fallen over recent decades, from 95% in 1991 to 75% in 2018. Frequent attendance at religious services – going at least monthly – shows less change over time, falling slightly from 22% to 19%.

Over recent decades, it is clear that public views of religious institutions have shifted in some respects. The proportion with some level of confidence in churches has fallen from 54% in 1991 to 47% in 2018. At a time when British society has been undergoing further processes of secularisation, perceptions of the power held by religious institutions have changed markedly but in the direction of thinking that they have too much power –  the proportion with this opinion rose from just 11% in 1991 to 36% in 2018. Showing stability in public opinion, disapproval of religious leaders exerting their authority over how people vote at elections has run at very high levels across the period (around or approaching three-quarters have held this view).

Several questions gauging belief in or the role of God also show decline. Two questions asking about belief in God offered a range of response options but – in each case – the option indicating a firm belief shows decline over time. In 1991, only a quarter said that God existed and had no doubts about it, which had fallen to 19% in 2018. In 1991 47% said that they believed in God and had always done so, which has declined to 35% in 2018. Weakening belief in God is also shown in other questions. Whereas 34% agreed in 1991 that that was a God who was personally concerned with every human being, this stood at 24% in 2018. The proportion concurring that life was only meaningful because of God’s existence also declined, from 19% to 15%.

Asked about other religious beliefs, the proportion expressing belief in heaven fell over the period (from 48% to 38%), as did the proportion that believed in religious miracles (from 40% to 27%). Belief in hell, which was much lower in relative terms in 1991, stayed about the same. Belief in life after death stood at 48% in 1991 and 43% in 2018.

Table 1 Analysis of of ISSP religion modules in the 1991 and 2018 BSA surveys, selected questions 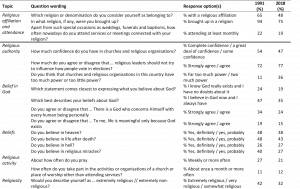