This second BRIN post reports reports various attitudes and behaviour for the May 2010 General Election by religious affiliation in a series of cross-tabulations, again using the EMBES survey.

Please note that for the tables using the religion categories, percentages sum down each column (except for Table 4a, which sums across the rows). The original religious affiliation variable on the EMBES dataset has been slightly modified. The ‘Other’ category used here combines one Jewish respondent, Buddhists (3 cases), and Other Religion (26 cases). The measures of attitudes and behaviour are the same as those looked at by ethnic group in my previous post.

To reiterate, Tables 1-5 report the weighted percentages and the unweighted number of cases. As before, the figures in this column should be kept in mind when using the percentages reported here as some categories may consist of only a small number of cases. 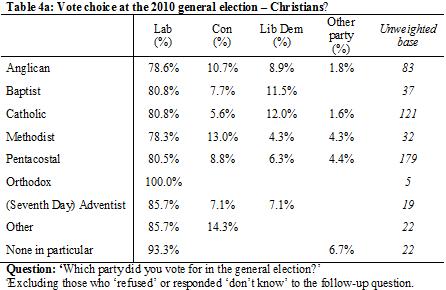 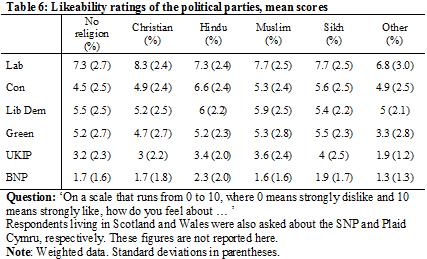 That’s all for today from the EMBES, although I’ll be posting shortly on the ‘Other Religion – write in’ section of the main BES.