There has been some discussion in the press regarding Kate Middleton’s recent confirmation as an Anglican, and so I thought I would look up the extant data. 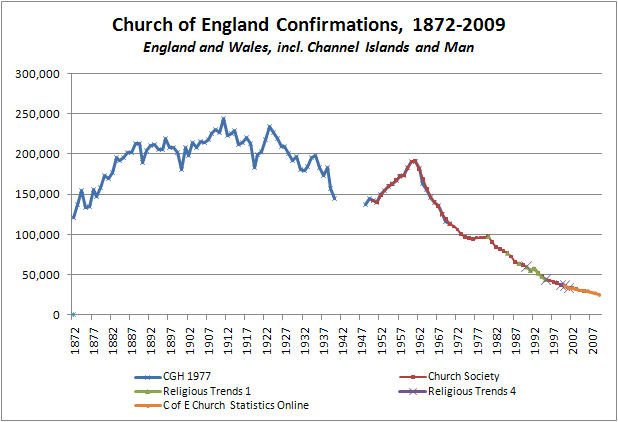 My knowledge of Anglican confirmation is fairly limited. I remember Noel Streatfeild’s autobiographical A Vicarage Family (1963) at school, where the teenage Vicky (Streatfeild’s alter ego) is confirmed shortly before the First World War (she wears a horrific dress and throws an inkwell at the family governess just before the service). From this I gathered that it was the Anglican analogue of Catholic first communion, required to take communion in an Anglican church – although apparently not, as the Church of England website explains here.

I have combined various sources to produce the graph above.

For 1872 to 1970 the source is Currie, Gilbert and Horsley’s data on confirmations from Churches and Churchgoers (1977), originally sourced from The Official Yearbook of the Church of England. The data and source note is also available on BRIN/figures here.

Secondly, there is a set of annual data compiled by the Church Society for 1950-2005 with a description of sources here (although note that the source description encompasses other measures of attendance and rites of passage). These overlap the CGH figures with a very small divergence between 1963 and 1969.

These cover different but sometimes overlapping different years and in some cases differ slightly (perhaps because of revision or rounding) although ultimately sourced from Church Statistics, Research & Statistics Department, Archbishops’ Council, Church House.

How can the decline be interpreted? The Church Society refers people to the following article by Brian Green in Crossway (2003). He argues that:

“church attendance and confirmations are firmly linked… if people are not confirmed, why would they attend a form of worship in which they may not participate fully?”

Paul Handley, editor of the Church Times, wrote yesterday in The Guardian that:

“The Church of England has relaxed its regulations, so that anyone who has been baptised can take communion, even in infancy if the priest agrees. Confirmation, then, has become much more of a conscious, opt-in sort of occasion”.

I’m not clear as to when the change in rules was brought into force (perhaps after Green’s commentary in 2003), or why – any clarification from readers would be welcome.

The CGH, Religious Trends and Church Statistics Online data are also given in the table below. For copyright reasons I refer readers again to the Church Society’s 1950-2005 compilation rather than reproducing them below.

Or download the data as a CSV file here.

This entry was posted in Historical studies, Measuring religion, Religion in the Press, Rites of Passage and tagged Church of England, Confirmation, Kate Middleton. Bookmark the permalink.