David Voas last week sent me a link to this fascinating Internet Monk blog chart, illustrating data collected by Pew on religious background, current affiliation and religious switching in the US. (Please do have a look at the original post and responses – they are full of detail.)

I have developed a similar chart for BRIN. Respondents to the 2008 British Social Attitudes survey were asked,

‘Do you regard yourself as belonging to any particular religion; which?’ (the ‘ReligSum’ variable)

‘In what religion, if any, were you brought up: What was your family’s religion?’ (the ‘RlFamSum’ variable).

However, for graphical purposes, the numbers for many groups are extremely small, which means they are difficult to depict. It’s also difficult to interpret the significance of the proportion joining or leaving accurately when numbers are so small.

Accordingly, categories were combined by the data publishers to form six broad groups: Church of England/Anglican, Roman Catholic, Other Christian (including the free churches and those people simply identifying themselves as non-denominational Christian), Non-Christian (members of other world religions and New Religious Movements), No Religious Affiliation, and those who refused to answer or did not know. It’s perhaps unhelpful that new and growing Christian groups are included in the ‘other Christian’ group together with nonconformist groups in decline – a further version of this chart could separate them out.

The chart ranks the groups in terms of popularity, with the ‘religion of upbringing’ on the left, and ‘current religion’ on the right. Each circle’s area is proportionate to the size of the group.

Both charts are a type of weighted flow chart: the flow arrows between the past religious status and current religious status have a thicker or thinner width in proportion to the number of people moving between each group at each time point. The intent is to illustrate the proportion of respondents who have switched between religious groups at some point between childhood and at the time of the survey, including from having a religious identity to having none, or vice versa. 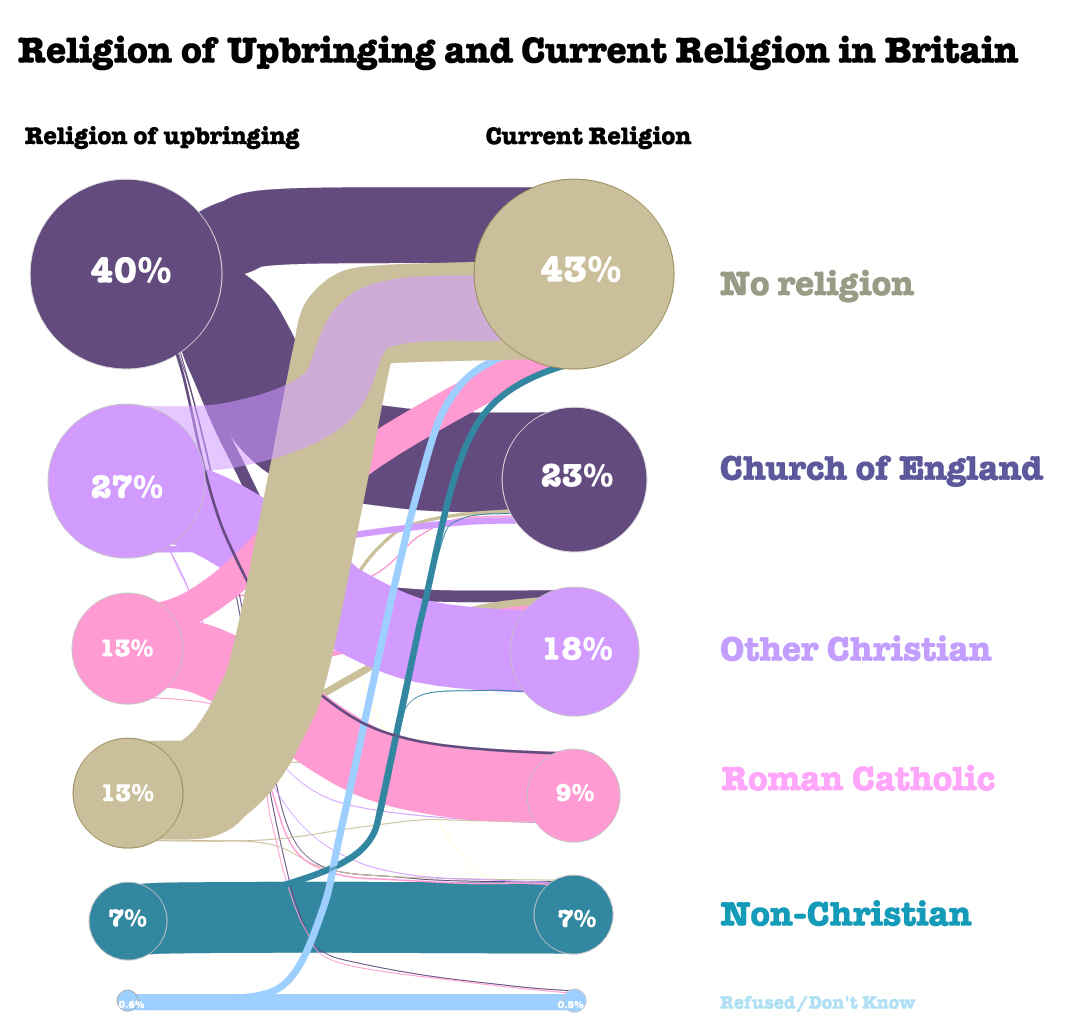 In Britain, there is less switching between religious groups and more from having a religious affiliation to having none (which the BRIN chart highlights) and so the sizes of the original and current religious groups are of more interest.

Michael Bell at Internet Monk used Microsoft Paint to devise the chart, whereas we simply used Excel and added text using Photoshop, avoiding the need to calculate pixel numbers. Curved and straight lines are available in the ‘Shapes’ option and widths can be adjusted to the correct centimetre. The circles were similarly adjusted using πr2  to calculate the width and height options.

The main flaw is that the area of the flow arrows is not proportionate to the size of the groups (which is what may be expected intuitively). The absolute width of the arrows was therefore arbitrary, and so I set the total belonging to each religious category in childhood as having a width equal to the diameter of each relevant circle on the left hand side. The obvious problem with this is that the arrows pointing to ‘Current Religion: None’ add up to having a greater width than the diameter, so one arrow was overlaid over another to ease presentation.

The underlying data are also available in this spreadsheet.

Besides the number of respondents reporting their religious identity during their upbringing, and current religious identity, tables are also available illustrating the data in percentage terms: first, setting the total for each group membership during upbringing to 100% (to illustrate religion of destination for those with a particular religious or irreligious upbringing), and secondly, setting the total for each current group membership to 100% (to illustrate religion of origin for each religious group as currently described). For example, in the first table, 52% of those who had an upbringing affiliated to the Church of England retain an Anglican affiliation; in the second table, 92% of those who currently have an affiliation to the Church of England had an upbringing in the Church of England.

Three issues should be borne in mind. First, the meaning of affiliation is not fixed across religious communities or over time, and additionally depends on the respondent. For Roman Catholics, membership depends on baptism, whereas for other denominations it may be more formal and associational; for some, religious identity also has a cultural component. Some may over-report affiliation as children in order to represent themselves as having switched bravely into having a different identity or ‘None’. Some would also argue that while there are fewer adherents compared with a generation or two ago, the religious practice of those who are affiliated is of increasingly higher quality and commitment.

Secondly, it should be remembered that the chart doesn’t adjust for age or migration history. The Church of England or Roman Catholic stickers are likely to be somewhat older than the leavers, and some of the stickers may also have had their religious identities formed in other countries, for which we make no allowance here. Thirdly, this is a snapshot of religious identity: over the life course some respondents will change their ‘current affiliation’ again – some moving between different religious communities, others choosing at a later stage to move from having a religious identity to having none.

Do I think this is a helpful visualisation method? Well, it’s attractive, and hammers home the point that the ‘Religious Nones’ are the dominant group and the religious affiliation they originally had. It’s not wonderful at depicting switching between religious groups because there is so little – the relevant arrows are hairline. The s-curve option in Excel takes some manoeuvring and it’s time-consuming to develop a graphic in this way. A more adept user of Photoshop may have better luck at devising such charts both efficiently and more attractively. A future option might be to look at using software such as Netdraw, where the width of arrows and position of circles can be determined automatically. Further ideas are very much welcome.