Religion and voting at the 2015 general election

The British Election Study 2015 recently released the dataset for wave 6 of their panel study, the fieldwork for which was undertaken immediately after the general election on 7 May (conducted between 8-26 May). The dataset and accompanying questionnaire can be obtained from here. This post looks at voting behaviour at the general election based on religious belonging, looking at the picture for Britain overall and then separately for Scotland and Wales. It is based on the full sample for wave 6, analysed here as a cross-section.

First, Table 1 looks at the voting behaviour of religious groups at the 2015 general election for Britain as a whole. It reports the share of the vote of the Conservatives, Labour, Lib Dems, UKIP and other parties amongst both Christian and non-Christian traditions, as well amongst the ‘religious nones’. Several aspects of the data are worthy of note. The strong support shown for the Conservative Party amongst Anglicans at post-war general elections continues. A plurality of Methodists supported the Conservatives, with pluralities supporting Labour amongst Baptists and other Christians. There is also evidence of Catholics’ historical tendency to align with the Labour Party. Labour’s traditionally strong support amongst non-Christian faiths is again evident here, particularly so amongst Muslims. Amongst followers of Judaism, there is considerable support for the Conservative Party, with half of them having voted for the Tories at the general election. Amongst the ‘religious nones’, a plurality voted for Labour. UKIP votes were more prevalent amongst Anglicans, Catholics, those in the unspecified other religion category and amongst those with no affiliation. Voting for the Lib Dems was most likely amongst Methodists and Baptists.

Table 2 shows the association between voting and religious belonging at the 2015 general election in Scotland. Reflecting the national context, it uses amended sets of categories for party support and religious affiliation. Note that the ‘Other party’ category include the UKIP vote share. Amongst Anglicans, there was a slightly greater tendency to vote Conservative rather than Labour. Amongst all other groups a plurality or majority supported the SNP, highest amongst Catholics – traditionally, a bastion of electoral support for Labour in Scotland – and those with no affiliation.  Support for the SNP was markedly lower amongst Anglicans, while this group showed the highest level of support for the Lib Dems in Scotland.

aIncluding other Christian, non-Christian and unspecified other.

Table 3 focuses on how Catholics (and for comparison – other religious groups) in Scotland voted at the 2010 and 2015 elections (using equivalent data from the BES’s 2010 internet panel study, which is available here). It can be seen that, while Catholic support for Labour, Conservatives and the Lib Dems declined between 2010 and 2015. Support for the Labour Party fell from over three-fifths to just over a third. Catholic support for the SNP increased from about a fifth in 2010 to well over half in 2015. Support for the SNP increased substantially amongst all other groups. 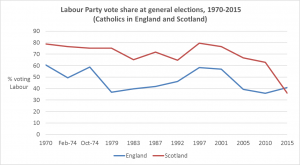 Finally, Table 4 shows equivalent data for Wales, again using amended sets of categories. Amongst Anglicans, voting was a close run thing between Labour and the Conservatives, with support for the former just eclipsing the latter. Amongst those with some other religious affiliation and those with no affiliation, pluralities voted for Labour. Support for Plaid Cymru was lowest amongst Anglicans. As can be seen, UKIP’s vote share varied little across the three groups.

aIncluding other Christian, non-Christian and unspecified other.

The obvious caveat that accompanies this analysis is that a wide array of social and attitudinal factors can influence how individuals’ vote at general elections, and this needs to be borne in mind when looking at the association between religion and party choice.

Previous BRIN posts have conducted separate analyses of data from wave 1 and wave 4 of the BES 2015 panel study:

For analysis of religion and voting at the 2010 general election, see:

This entry was posted in Religion and Politics, Survey news, Uncategorized. Bookmark the permalink.