Faith and Welcoming: Do the Religious Feel Differently about Immigration and Immigrants?

In the wake of the Brexit result, it became clear from a range of studies that British public attitudes were overall cool or negative towards immigration, and moreover that immigration attitudes were a major determinant of the EU Referendum result. The warmest tended to support Remain; the most hostile tended to be Leave supporters.

To understand further, we should examine how more fundamental demographic and socio-structural variables account for immigration attitudes. In this post and in our associated report, we focus on the impact of religion and religiosity. There are a number of reasons why religion might be thought important for immigration attitudes, and either work to encourage and reduce tolerance. So we ask: are the religiously observant more or less hostile to immigration?

On the one hand, religions are often global, particularly Islam, Judaism, Buddhism and Christianity, and foster a sense of fellowship with others of the same religion living in different countries. Religion is also thought to be particularly effective at binding diverse groups together, and creating a shared identity. Attendance at a place of worship and other forms of active practice, particularly within a shared moral community, is associated with pro-social behaviours such as volunteering, political participation, and charitable giving. The psychologist Ara Norenzayan suggests that religion’s effectiveness at fostering co-operation may be down to most major religions enshrining belief in omniscient deities who observe and judge human behaviour. Religious doctrines also matter: most of the major global religions incorporate some form of ‘the golden rule’, or to do as you would be done by.

On the other hand, religion’s effectiveness at flicking what Jonathan Haidt terms the ‘hive switch’ can generate conflict. Religion is closely bound up with territory and a sense of belonging, and religious conflict is often particularly violent. There is growing scholarly interest in the phenomenon of Christian nationalism: a number of studies using US data have established that Christian nationalism is important for explaining antipathy towards immigrants and immigration, while religious attendance tends to reduce it. Christian nationalism as a phenomenon separate from church attendance and active religiosity has also been suggested as an important driver of electoral support for Donald Trump.

Accordingly, a team of University of Bristol students and faculty set out to establish the post-2008 evidence for the relationship between religion and immigration attitudes in Britain. To do so, we used a range of survey sources considered to be ‘gold standard’ in the field (the British Social Attitudes surveys 2011-2016, the European Social Survey 2014, and the Ethnic Minority British Election Study 2010), as well as further sources which provide more timely data (the British Election Study online panel 2016/17).

We then examined attitudes to immigration policy; to the economic and cultural benefits of immigration; and asylum policy, broken down by religious community and frequency of attendance at a place of worship. We also broke down attitudes towards immigration, immigrants and asylum policy by ethnoreligious group using ethnic minority survey data. We examined whether the effect of church attendance on immigration attitudes is the same across the country, or depends on local context. To further validate differences between religious communities and levels of attendance, we examined whether the relationships we found between religious affiliation and attendance and immigration attitudes still held once a range of socio-demographic confounders were taken into account. As a final check, we used recent British Election Study Online Panel data to see whether the patterns we found in 2010-2015 data continued to hold in the post-EU Referendum period.

Our chief finding was that attending a place of worship frequently (at least monthly) consistently predicts having warmer attitudes towards immigrants when we look at general population samples. (For ethnic minority samples, the differences are more nuanced because unreligious ethnic minority members also tend to have relatively positive attitudes.)

We also found that reporting a religious identity, but not attending a place of worship frequently, is associated with cooler attitudes towards immigrants than those of the unreligious. This is across a range of measures of immigration attitudes and samples from different social attitudes surveys. Figures 1 and 2 below provide examples. This is suggestive of an important difference in worldview between nominal Christians who do not practice their religion actively, and those who identify as unreligious or secular. 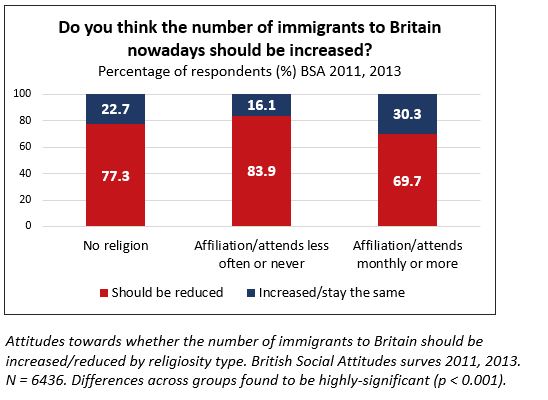 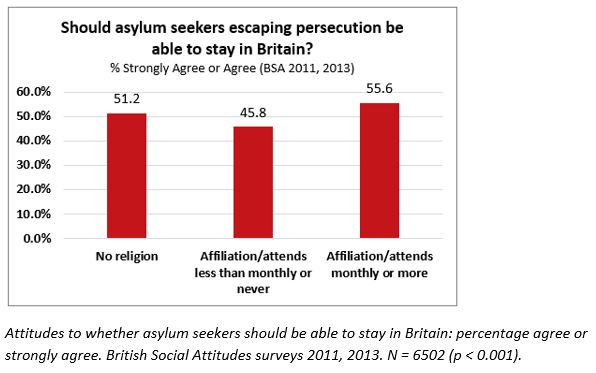 Further, we found that context matters: church attendance has a larger effect on immigration attitudes in areas which are more anti-immigrant. This is perhaps because in places which are less cosmopolitan, religious attendance combats ‘in-group’ feeling more strongly, while in more ‘open’ communities, there may be other sources of moral community besides religion so that the effects of church attendance are less distinct.

To test whether these relationships are still robust for the post-Referendum period, we examined the British Social Attitudes Survey 2016 (fielded after the EU Referendum) and the May-June 2016/April-May 2017 waves of the British Election Study online panel. The 2016 BSA asked respondents to identify issues of concern or worry, one of which was immigration. The BES online panel has recurrently asked respondents whether the UK should allow many more immigrants or many fewer immigrants in terms of where they would place themselves on a 0-10 scale.

The BSA 2016 results showed that the actively-religious were the least likely to choose immigration as an issue of concern, followed by the unreligious, followed by the nominally-religious. Notably, however, the gap between those attending a place of worship at least monthly and the unreligious had essentially disappeared, as shown in Figure 3, although attendance does have a ‘concern-reducing’ effect for those with a religious identity. 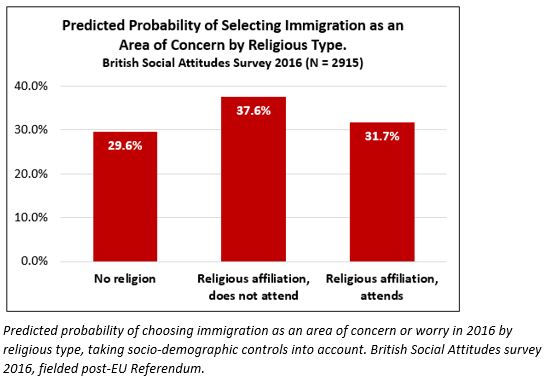 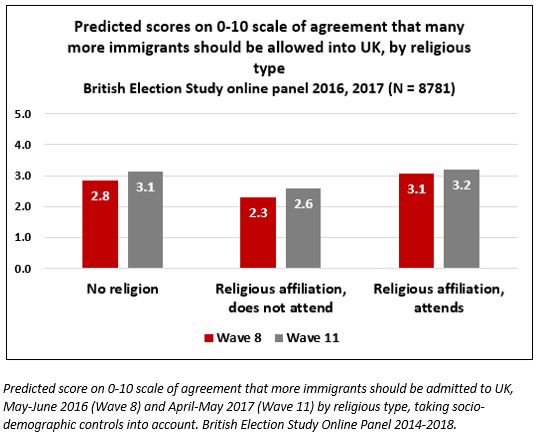 Our Faith and Welcoming Report provides extensive further detail on the precise effects of religious affiliation, using both broad and detailed measures, and of frequency of attendance on immigration attitudes. It summarises the most detailed set of analyses of the relationship between religion and immigration attitudes in Britain available to date, using publicly-available data.

Nevertheless, further questions remain. What is it about religious attendance which leads to greater openness towards immigrants and immigration? Part of the difference between those who are ‘religious in name only’ and the actively-religious may well be down to the sheer fact of the latter being involved in a community of any sort, rather than it being religious. We might see similar effects for secular participation too.

But it is quite plausible that at least part if it is down to being involved in a religious and moralized community in particular, where messages of openness towards immigrants and refugees are often broadcast by religious personnel, reinforced by other worshippers, and further enhanced by the perception of divine judgement.

We also need to explore further the attitudes and worldviews of those who are ‘religious in name only’. Why are their attitudes towards immigration more negative in most cases than those of the secular? It is likely that having a nominal religious identity, particularly one associated with the traditional religious majority, may offer a source of meaning and imagined belonging. It has also been suggested that a self-definition as Christian (although never actually practising) may serve as a signal that the respondent is not a member of a minority religion, and furthermore not atheist or irreligious. This identity appears to be associated with ‘cultural defence’: protection of cultural identity against perceived threat. Such ethnic and nominal Christianity offers those searching for a group identity one which provides a particular sense of meaning and community, while also avoiding the experience of social contact, active commitment to community, and more tolerant worldview fostered by regular attendance at a place of worship.

At the time of publication in February 2018:

Harry Drake was a final-year student in Sociology with Quantitative Research Methods.

Lucy Moor was a third-year student on the M.Sci. in Politics with Quantitative Research Methods.

Tom Owton was a second-year PhD student in Geography and an ESRC Advanced Quantitative Methods student.

Silvia Sim had recently graduated from the University of Bristol in July 2017 in Sociology with Quantitative Research Methods, before beginning a career in consulting in Singapore.

Faith and Welcoming: Do the Religious Feel Differently about Immigration and Immigrants? was the result of a staff-student research project at the University of Bristol by participants in the Q-Step scheme. Led by the Nuffield Foundation in a consortium with the Economic and Social Research Council and HEFCE, the Q-Step programme supports new courses educating social science students in quantitative methods, via a £19.5 million investment geared to achieving a ‘step change’ in quantitative skills acquisition in the UK. All of the students above have completed or are completing QStep degree programmes.