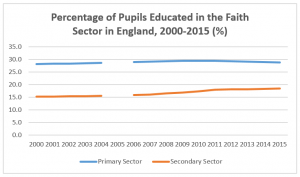 It appears that definitions may have changed over time since there was a jump in the number of non-denominational schools between 1999 and 2000. A distinction between other schools and other Christian schools was introduced from 2000. Look at the numbers for each year closely; there are surprising jumps in some cases (particularly the ‘Other’ category) which merit caution with regard to interpretation.

Maintained school numbers had shown secular decline for some years but from about 2010 have showed an aggregate increase, partly due to the effects of the economy on private school numbers and partly through rising birth rates. The percentage of primary school pupils educated in the faith sector has remained stable overall although composition is changing slightly, with decline in overall school and pupil numbers in the Anglican and Catholic systems, and increase in other Christian, Jewish, Muslim and Sikh schools (although overall numbers are very small particularly in the latter two categories).