Religion and Party Preference in 2019

By convention, religious leaders say little regarding politics in Britain – a key difference compared with the US, where ministers in a variety of denominations may well comment on political events (Calfano and Djupe 2009).

On occasion, however, individual faith leaders do feel moved to comment in Britain. For example, during the EU Referendum campaign period in 2016, the think tank Ekklesia found that major denominations generally favoured neutrality, while former Archbishop of Canterbury Lord Carey, commentator Revd. Dr Giles Fraser and the group ‘Christians for Britain’ were associated with the broader Leave cause (Barrow 2016). Nevertheless, very general reference was made to ‘Christian values’ by Christian groups supporting both the Leave and Remain campaigns.

The 2019 General Election is accordingly unusual given the prominence of statements by religious leaders and religious bodies during the campaign period. It is timely, then, to consider the wider question of how religious affiliation and religiosity relate to political party preference.

The relationship between religion and party preference is often neglected in contemporary polling, where more attention is paid to age, gender, social class and education. In more complex analyses in the political science literature, it can appear as if religious identity counts for relatively little compared with policy attitudes or perspectives over party competence. Christopher Raymond and others have however provided important revisions to demonstrate religion’s continuing importance for voting in Britain (Raymond 2011, Tilley 2015).

In the following overview, we look at the most recent wave of the British Election Study Internet Panel currently available, which offers a large sample size enabling us to look at religious communities in detail. 37,959 respondents took part in Wave 16 of the British Election Study, which included a panel refresh, with religious affiliation data available for 35,628.

Respondents were asked, ‘Do you have a religious denomination?’

‘Generally speaking, do you think of yourself as Labour, Conservative, Liberal Democrat or what?’

From the above, we note the following:

It is also of value to think about the difference between religious affiliation and practice.
Setting aside particular examples (such as highly-religious Muslim women who may not attend mosques regularly) people who attend a place of worship frequently tend to behave differently to those who have a religious identity but who do not attend.

However, when comparing those who say they attend at least monthly with those who do not, differences in party preference look quite slight, when examining the full sample in Figure 2 below. Those who attend at least monthly appear more likely than those who do not to report that they don’t know who they will vote for, and perhaps very  slightly less likely to prefer the two largest parties. 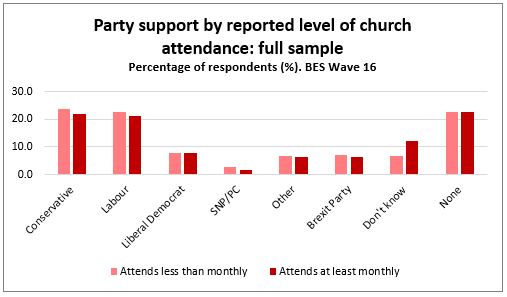 To probe further, we can break party support down by religious affiliation and frequency of church attendance, categorising respondents as ‘attending at least monthly’ vs ‘less often or never’.

This does mean that the numbers are getting small in some cases, though it may be that low religious practice is really quite rare for a particular faith community. For example, there are few identifying as Evangelical Christian who do not attend frequently. For completeness, the estimates are provided for each community and reported attendance rate, but readers should pay attention to the total sample size reported at the foot of each column. 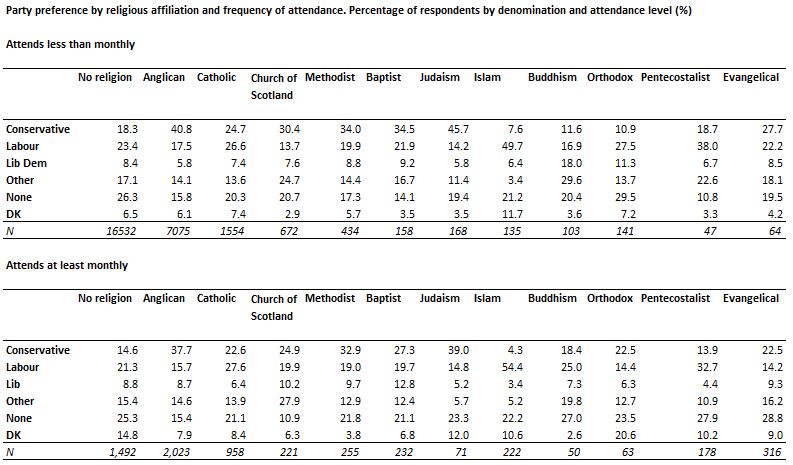 The data are also graphed in the slideshow below.

In examining these breakdowns, we should bear the following in mind.

First, we are using a measure of religious affiliation drawn from only a single wave of the BES. Longitudinal analysis suggests that people do move between a nominal religious identity and no religion depending on how salient religion is to them at that moment (Voas 2007 provides a useful survey).

Secondly, we are not entirely sure when religious affiliation was captured by YouGov – only that they update it regularly. Religious denomination is a core ‘profile’ variable on which they maintain information for their larger panel, from which they draw the British Election Study panel.

Thirdly, social and demographic variables such as age, gender, education, occupational status, and regional location are all very likely to reduce the size of differences in party support by religious denomination. Regression modelling is required to take account of such differences. Anglican, Church of Scotland and Nonconformist adherents in particular are older than the rest of the population, and age is an important driver of vote preference.

To the extent that associations do remain after controls have been taken into account, the question then is why. Rather than conceiving of religious affiliation as an ‘additional’ variable, we should think of it as shaping fundamental, long-running cleavages which affect other attitudes and worldviews. Associations between religious identity and party preference continue to exist in a secular world because parents encourage children into having particular loyalties with regard to both politics and faith. Religious and political socialisation, often originating within the family, then structures other political values and attitudes.

The association may also arise due to differences in basic values. Political ideology and core values, particularly on the libertarian-authoritarian dimension, may inform choice of whether to retain a religious identity, with ‘ethnic nominalism’ an important variety of secular religiosity identified by Storm (2011) and Day (2011).

What about the unreligious? We do know that cultural values on both left-right and liberalism-authoritarianism dimensions, education, and social generation structure electoral choice. For some raised as secular, their non-religious worldviews may have a similar moral force as those of the religious. Even among the avowedly secular, we can occasionally detect the effect of religion of upbringing in their electoral choices (see for example, Huang 2019 with regard to EU Referendum vote preference).

Religion and the legacy of religious upbringing accordingly continue to matter in British politics as a fundamental structuring force.

The tables and graphs posted above are also available here in spreadsheet format.

Notes
1. The BES Internet Panel is an online panel study, drawn from the YouGov panel. Accordingly it is likely to suffer from the biases found generally in online panels, compared with surveys drawing random samples, for example using the Postcode Address File. The analyses reported above have all been weighted by wt_new_W16

2. With smaller sample sizes, it is more conventional to combine the smaller ‘other’ parties into a single group. In this case, the Brexit Party and nationalist parties were reported separately. Bear in mind that the Wave 16 data were gathered in the aftermath of the European elections, and should not be taken to indicate voting intention at the time of writing (November 2019).

3. The geographic distribution of both faith communities and political parties is uneven, which affects the opportunity for respondents of different faith backgrounds to offer support to parties such as the SNP/PC.