Recent research has shed light on the voting preferences of the British electorate at last year’s Brexit referendum, looking at how support for remain or leave was distributed across a range of socio-demographic groups, as well as showing how it varied based on party support, policy preferences and ideological beliefs. How did religious groups in wider society vote? Were some more likely than others to have voted to leave the EU or vice versa? Data from wave 9 of the British Election Study Internet Panel Study, undertaken after the referendum (with fieldwork conducted by YouGov between 24 June-6 July 2016), allow a comparison of voting behaviour based on religious affiliation. The core sample for wave 9 is used, which enables cross-sectional analysis of the data.

The figure below shows the proportions voting remain and leave within different religious groups. Some groups showed an even split between the two options on the ballot (Methodists and Baptists) and some showed a slight preference for one side or the other (Catholics and Church of Scotland / Presbyterian for remain; Jews and other Christian for leave); but more distinct voting patterns are also evident. Those who identify themselves as Anglican or Church of England were clearly in the leave camp – 60% backed Britain leaving the EU and 40% supported staying. Muslims were clearly in the remain camp, with 69% choosing this option and 31% in favour of leaving the EU. Those with no religion (a group with a younger age profile) were in the ‘remain camp’, by 57% to 43%, as were those belonging to other non-Christian faiths (55% to 45%) and those who preferred not to disclose their religious affiliation (55% to 45%). 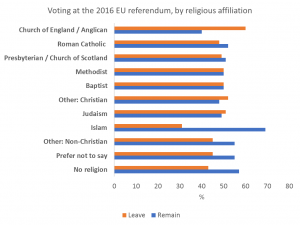