What Anglicans (and others) think about homosexuality and disestablishment 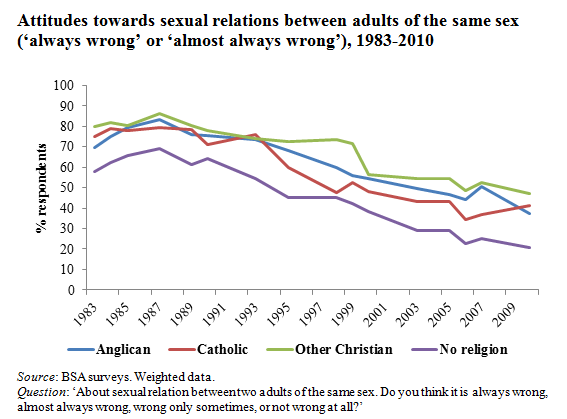 In view of the discussion generated by the response, it is worth examining what Anglicans themselves think about gay relationships. My colleague Ben Clements at the University of Leicester has recently looked at data from the British Social Attitudes surveys and the European Values Surveys to see how attitudes to homosexual relationship have changed over the past three decades or so.

We recently published his full report here as part of our Figures section, which provides an array of statistics on attitudes to gay relationships, towards gay people, to adoption and other issues. To summarise:

A specific question on the right to marriage was asked on the British Social Attitudes survey in 2007:

‘How much do you agree or disagree that … gay or lesbian couples should have the right to marry one another if they want to?’

‘the institution of marriage would have been redefined generally for the purposes of English law. At the very least that raises new and as yet unexplored questions about the implications for the current duties which English law imposes on clergy of the Established Church’ [Annex, paragraphs 21, 22].

Relatedly, Ben has also recently looked at attitudes to disestablishment of the Church of England. He analysed data from the British Election Study (BES) AV Referendum Study, undertaken in spring 2011, which included a number of questions regarding reform of British institutions. The full report is also available here in the Figures section.

The question on disestablishment, which was asked on the post-campaign survey wave, was:

‘The Church of England should keep its status as the official established church in England.’

The response options were: ‘strongly agree’, ‘agree’, ‘neither agree nor disagree’, ‘disagree’ and ‘strongly disagree’.

While the BES does not ask respondents their religious affiliation, we can break down responses by other demographics. To simplify, the ‘strongly agree’ and ‘agree’ response categories were collapsed. To summarise:

Again, the full reports and breakdowns are available in the Figures section via the drop-down menu, where the contact details for Ben are also available (although note that he is currently on paternity leave – congratulations Ben!).