The survey includes three separate ‘modules’, or sets of questions, on religion, comprising about 100 questions on religious beliefs, behaviour and identity in total.

The BSA regularly asks people what their religious affiliation is and their frequency of church attendance. The three additional modules are:

The ISSP is a cross-national collaborative project to add questions to national social surveys, to allow researchers to compare findings across countries. It began in 1984 as a US-German-British-Australian collaboration; it has since grown rapidly so that by 2008 45 member countries took part. Each year recurrent questions are asked on respondents’ socio-demographic characteristics, and in addition there are modules of questions on particular issues, often repeated every decade or so, covering areas such as the role of government, sport and leisure, inequality, gender and the family, and so forth.

The main drawback of the ISSP is that it only surveys about 1,000 people in each country, which is sufficient for cross-national comparative purposes but makes it difficult to conduct detailed analysis of population subgroups within countries, or change over time.

Further, the replication of questions from previous surveys, while important for measuring change, means that relatively little space is available to cover new issues. A consortium of researchers in Britain, the Netherlands, Denmark, Ireland and Northern Ireland accordingly proposed to extend the sample size in their countries to 2000, and to add 24 new questions to the survey. These enhancements allow deeper analysis of religion and society both within these five countries and through cross-national comparisons.

The following are examples of the NORFACE additional questions:

Some books or films offend people who have strong religious beliefs. Should books and films that attack religions be banned by law or should they be allowed?

Some people say that being Christian is important for being truly British [or Catholic and Irish, or Christian and Danish or Dutch as appropriate – this question was not put in Northern Ireland]. Others say it is not important. How important do you think it is?

Other extension questions ask how religious the respondents’ parents were when they were children, and the importance of religion in their lives at present. This will allow future researchers to examine transmission of religiosity between generations. Others ask respondents their attitudes towards gay marriage and adoption, embryo cell research and euthanasia.

The Faith Matters UK items replicate a major US survey held in 2006, 2007 and 2011, available for download via the Association of Religious Data Archives. The Faith Matters survey was also replicated in Ireland and Northern Ireland, and again in Britain with a separate replication for a British Muslim sample. This was funded by the Templeton Foundation.

The US survey, led by Robert Putnam (Harvard) and David Campbell (Notre Dame) was arguably the biggest survey ever into religion in the US, and designed to investigate further the finding in Bowling Alone (2000) that religious organisations were a major source of social capital in the US. Their findings were published in 2010 in American Grace: How Religion Divides and Unites Us. The 2006 Faith Matters questions focus on social relations and civic engagement. The replication allows direct comparison between the US and the much more secular Britain.

How to Explore the Data

A bespoke online analysis tool exists at Britsocat.com to conduct univariate, bivariate and over-time analysis of data from the British Social Attitudes surveys. Run by the Centre for Comparative European Survey Data, it is free to registered users.

Over 20,000 questions have been put to respondents over the course of the 1983-2014 surveys, most as a one-off, but many recurrently. Answers are for nationally-representative samples of the population. A searchable database is available to browse the questionnaires with users able to click through to responses.

Responses can be broken down by socio-demographic variables such as age group, occupational status and gender, as well as by survey year.

Some illustrative breakdowns are given below of religious salience and spirituality by age and sex, and the relationship between religion of upbringing and current religious affiliation. 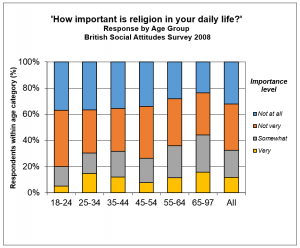 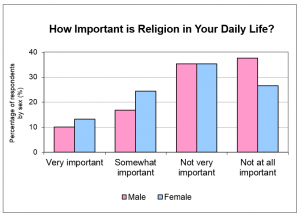 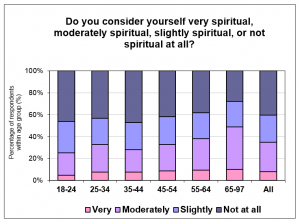 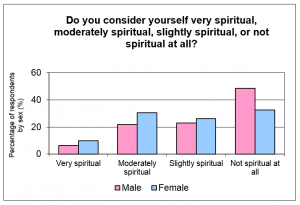 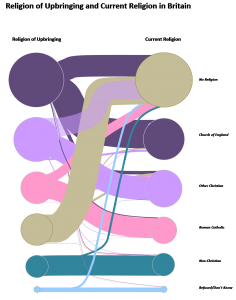 A few breakdowns are provided within this spreadsheet: